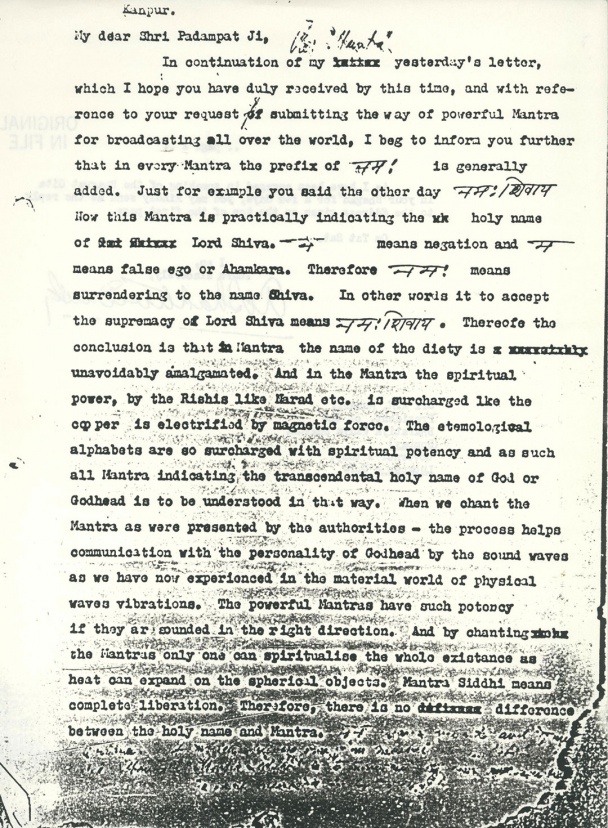 Letter to Sri Padampat Singhania (Page 1a of 5)

Letter to Sri Padampat Singhania (Page 1b of 5) 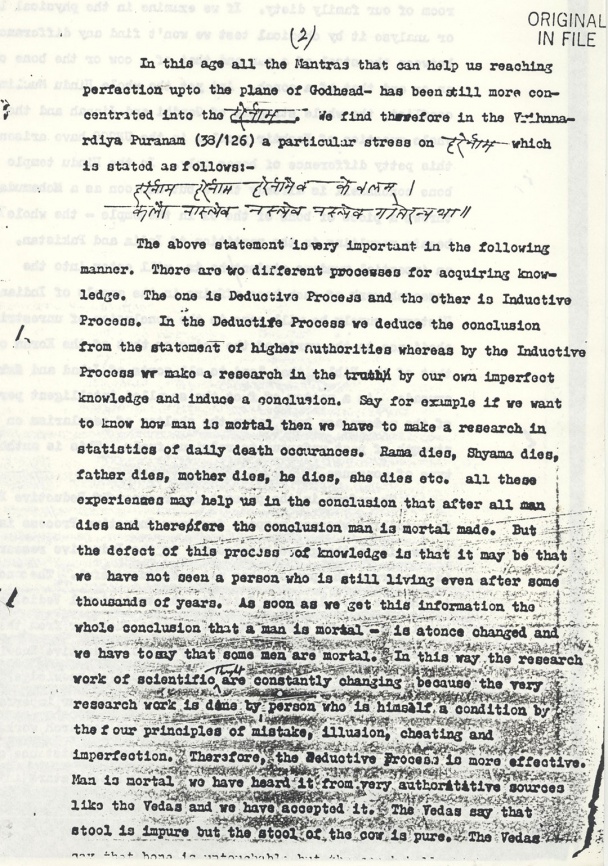 Letter to Sri Padampat Singhania (Page 2a of 5)

Letter to Sri Padampat Singhania (Page 2b of 5) 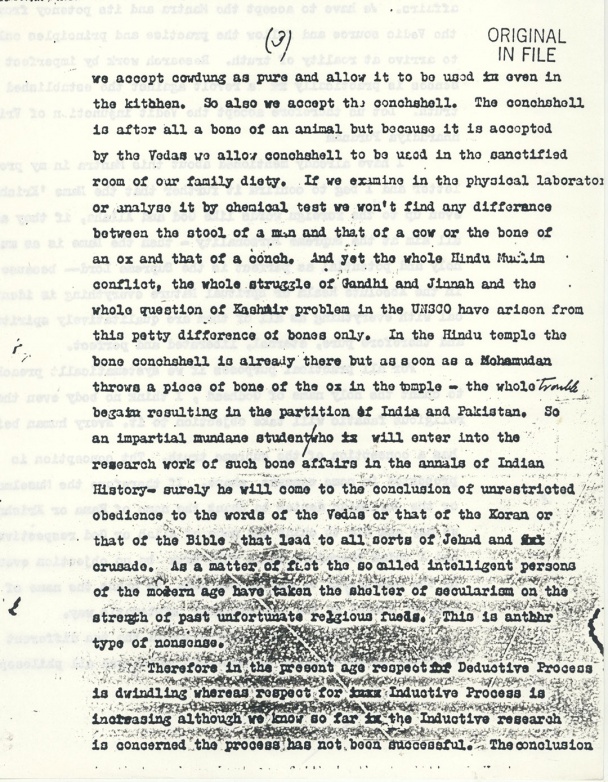 Letter to Sri Padampat Singhania (Page 3a of 5)

Letter to Sri Padampat Singhania (Page 3b of 5) 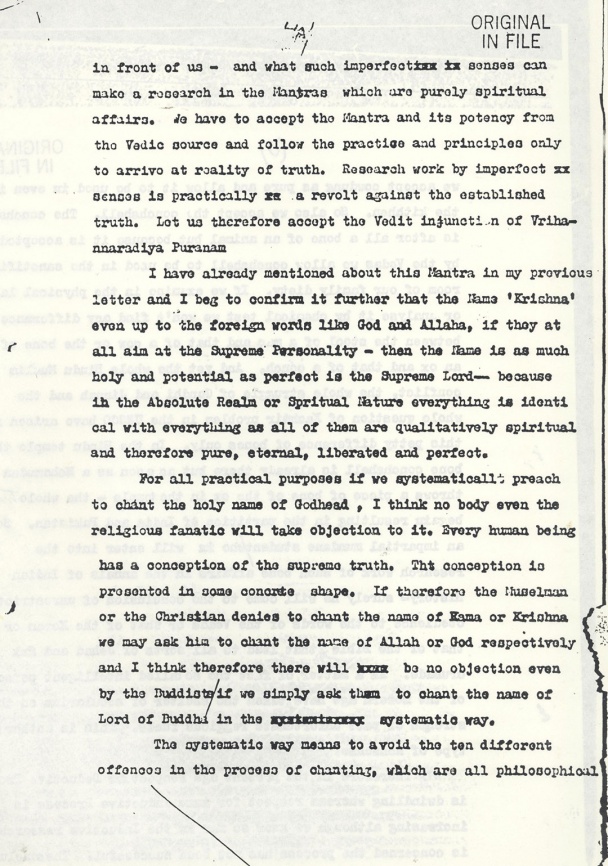 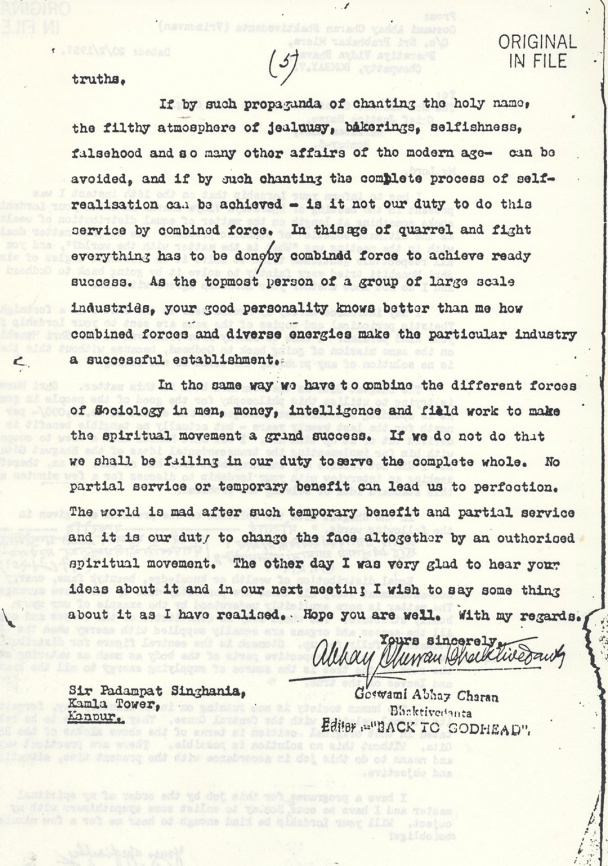 In continuation of my yesterday's letter, which I hope you have duly received by this time, and with reference to your request of submitting the way of powerful Mantra for broadcasting all over the world, I beg to inform you further that in every Mantra the prefix of Namah is generally added. Just for example you said the other day Namah Sivaya. Now this Mantra is practically indicating the holy name of Lord Shiva. Na means negation and Ma means false ego or Ahamkara. Therefore Namah means surrendering to the name Shiva. In other words to accept the supremacy of Lord Shiva means Namah Shivaya. Therefore the conclusion is that in Mantra the name of the deity is unavoidably amalgamated. And in the Mantra the spiritual power, by the Rshis like Narad etc. is surcharged like the copper is electrified by magnetic force. The etymological alphabets are so surcharged with spiritual potency and as such all Mantra indicating the transcendental holy name of God or Godhead is to be understood in that way. When we chant the Mantra as were presented by the authorities - the process helps communication with the personality of Godhead by the sound waves as we have now experienced in the material world of physical waves vibrations. The powerful Mantras have such potency if they are sounded in the right direction. And by chanting the Mantras only one can spiritualise the whole existence as heat can expand on the spherical objects. Mantra Siddhi means complete liberation. Therefore, there is no difference between the holy name and Mantra. Man means mind and tra deliverance. That which delivers one from mental speculation is called "Mantra". "Mantra Siddhi" is to transcend the gross and subtle mental plane. The same meaning is for [text missing] ___

In this age all the Mantras that can help us reaching perfection up to the plane of Godhead- has been still more concentrated into the Hari-nama. We find therefore in the Brhannaradiya Puranam (38/126) a particular stress on Harinama which is stated as follows:

The above statement is very important in the following manner. There are two different processes for acquiring knowledge. The one is Deductive Process and the other is Inductive Process. In the Deductive Process we deduce the conclusion from the statement of higher authorities whereas by the Inductive Process we make a research in the truth by our own imperfect knowledge and induce a conclusion. Say for example if we want to know how man is mortal then we have to make a research in statistics of daily death occurrences. Rama dies, Shyama dies, father dies, mother dies, he dies, she dies, etc. all these experiences may help us in the conclusion that after all man dies and therefore the conclusion man is mortal made. But the defect of this process of knowledge is that it may be that we have not seen a person who is still living even after some thousands of years. As soon as we get this information the whole conclusion that a man is mortal - is at once changed and we have to say that some men are mortal. In this way the research work of scientific thought [handwritten] are constantly changing because the very research work is done by person who is himself a condition by the four principles of mistake, illusion, cheating and imperfection. Therefore, the Deductive Process is more effective. Man is mortal we have heard it from very authoritative sources like the Vedas and we have accepted it. The Vedas say that stool is impure but the stool of the cow is pure. The Vedas say that bone is untouchable but the conchshell which is also a bone is perfectly pure. For the common man the statements of the Vedas appear to be contradictory. But in spite of such contradiction, because we Hindus accept the Vedas as authority we accept cow dung as pure and allow it to be used even in the kitchen. So also we accept the conchshell. The conchshell is after all a bone of an animal but because it is accepted by the Vedas we allow conchshell to be used in the sanctified room of our family deity. If we examine in the physical laboratory or analyse it by chemical test we won't find any difference between the stool of a man and that of a cow or the bone of an ox and that of a conch. And yet the whole Hindu Muslim conflict, the whole struggle of Gandhi and Jinnah and the whole question of Kashmir problem in the UNSCO have arisen from this petty difference of bones only. In the Hindu temple the bone conchshell is already there but as soon as a Muhammadan throws a piece of bone of the ox in the temple - the whole trouble began, resulting in the partition of India and Pakistan. So an impartial mundane student who will enter into the research work of such bone affairs in the annals of Indian History- surely he will come to the conclusion of unrestricted obedience to the words of the Vedas or that of the Koran or that of the Bible that lead to all sorts of Jehad and crusade. As a matter of fact the so called intelligent persons of the modern age have taken the shelter of secularism on the strength of past unfortunate religious feuds. This is another type of nonsense.

Therefore in the present age respect for Deductive Process is dwindling whereas respect for Inductive Process is increasing although we know so far the Inductive research is concerned the process has not been successful. The conclusion is that we have lost our faith in the traditional Vedic knowledge handed down from the Guru to Chela or from the father to the son, although such system of Deductive Knowledge from the authority is the most perfect form of knowledge. The ultimate truth which is far beyond the reach of our imperfect senses can never be known by such inductive research work. The imperfect senses could not even measure the distance of the physical product The Sun or the Innumerable stars in front of us - and what such imperfect senses can make a research in the Mantras which are purely spiritual affairs. We have to accept the Mantra and its potency from the Vedic source and follow the practice and principles only to arrive at reality of truth. Research work by imperfect senses is practically a revolt against the established truth. Let us therefore accept the Vedic injunction of Vrihannaradiya Puranam

I have already mentioned about this Mantra in my previous letter and I beg to confirm it further that the Name "Krishna" even up to the foreign words like God and Allah, if they at all aim at the Supreme Personality - then the Name is as much holy and potential as perfect is the Supreme Lord— because in the Absolute Realm or Spiritual Nature everything is identical with everything as all of them are qualitatively spiritual and therefore pure, eternal, liberated and perfect.

The systematic way means to avoid the ten different offenses in the process of chanting, which are all philosophical truths.

If by such propaganda of chanting the holy name, the filthy atmosphere of jealousy, bickerings, selfishness, falsehood and so many other affairs of the modern age- can be avoided, and if by such chanting the complete process of self-realization can be achieved - is it not our duty to do this service by combined force. In this age of quarrel and fight everything has to be done by combined force to achieve ready success. As the topmost person of a group of large scale industries, your good personality knows better than me how combined forces and diverse energies make the particular industry a successful establishment.

In the same way we have to combine the different forces of Sociology in men, money, intelligence and field work to make the spiritual movement a grand success. If we do not do that we shall be failing in our duty to serve the complete whole. No partial service or temporary benefit can lead us to perfection. The world is mad after such temporary benefit and partial service and it is our duty to change the face altogether by an authorised spiritual movement. The other day I was very glad to hear your ideas about it and in our next meeting I wish to say some thing about it as I have realised. Hope you are well. With my regards.