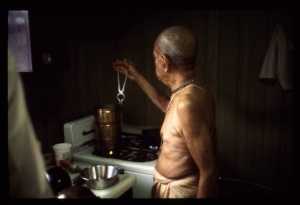 July 1 marks the day Śrīla Prabhupāda takes possession of the storefront and one of the rear apartments at 26 Second Avenue. He immediately conducts regular classes. Mr. Goldsmith finalizes the incorporation of the International Society for Krishna Consciousness.

Entries in this section are abbreviated, as compared with the previous sections. This perhaps results from Śrīla Prabhupāda's being absorbed with the active beginnings of his movement. These events are elaborately discussed in the Śrīla Prabhupāda Līlāmṛta.

Notable occurrences are the initiation of Brahmānanda, Acyutānanda, Satsvarūpa and Kīrtanānanda, the purchase of the first two mimeograph machines and subsequest publication of the first Western edition of Back to Godhead, the beginning of Śrīla Prabhupāda's relationship with Allen Ginsberg, and the hiring of Judson Hall to hold a lecture program.

There are problems with the immigration authorities after they refuse to renew Śrīla Prabhupāda's visa because he has been in the U.S. for more than one year. On September 27, a collection is held to defray the legal costs, and Allen Ginsberg donates $100.

Śrīla Prabhupāda still wants to acquire a large building for a temple and preaching purposes. On October 31 there is a $1300 donation to the building fund by Brahmānanda, and the November accounts section (see page 206) shows a loan for $5,000 from a donor named Jonathan, a friend of Ravindra-svarūpa dāsa, on November 1.