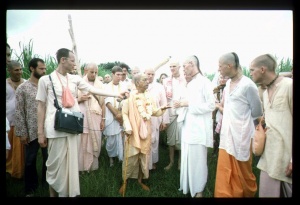 My dear sons of demons, the Supreme Personality of Godhead, Nārāyaṇa, is the original Supersoul, the father of all living entities. Consequently there are no impediments to pleasing Him or worshiping Him under any conditions, whether one be a child or an old man. The relationship between the living entities and the Supreme Personality of Godhead is always a fact, and therefore there is no difficulty in pleasing the Lord.

One may ask, "One is certainly very attached to family life, but if one gives up family life to be attached to the service of the Lord, one must undergo the same endeavor and trouble. Therefore, what is the benefit of taking the trouble to engage in the service of the Lord?" This is not a valid objection. The Lord asserts in Bhagavad-gītā (BG 14.4):

"It should be understood that all species of life, O son of Kuntī, are made possible by birth in this material nature, and that I am the seed-giving father." The Supreme Lord, Nārāyaṇa, is the seed-giving father of all living entities because the living entities are parts and parcels of the Supreme Lord (mamaivāṁśo ...jīva-bhūtaḥ (BG 15.7)). As there is no difficulty in establishing the intimate relationship between a father and son, there is no difficulty in reestablishing the natural, intimate relationship between Nārāyaṇa and the living entities. Svalpam apy asya dharmasya trāyate mahato bhayāt: if one performs even very slight devotional service, Nārāyaṇa is always ready to save one from the greatest danger. The definite example is Ajāmila. Ajāmila separated himself from the Supreme Personality of Godhead by performing many sinful activities and was condemned by Yamarāja to be very severely punished, but because at the time of death he chanted the name of Nārāyaṇa, although he was calling not for the Supreme Lord Nārāyaṇa but for his son named Nārāyaṇa, he was saved from the hands of Yamarāja. Therefore, pleasing Nārāyaṇa does not require as much endeavor as pleasing one's family, community and nation. We have seen important political leaders killed for a slight discrepancy in their behavior. Therefore pleasing one's society, family, community and nation is extremely difficult. Pleasing Nārāyaṇa, however, is not at all difficult; it is very easy.

One's duty is to revive one's relationship with Nārāyaṇa. A slight endeavor in this direction will make the attempt successful, whereas one will never be successful in pleasing his so-called family, society and nation, even if one endeavors to sacrifice his life. The simple endeavor involved in the devotional service of śravaṇaṁ kīrtanaṁ viṣṇoḥ (SB 7.5.23), hearing and chanting the holy name of the Lord, can make one successful in pleasing the Supreme Personality of Godhead. Śrī Caitanya Mahāprabhu has therefore bestowed His blessings by saying, paraṁ vijayate śrī-kṛṣṇa-saṅkīrtanam: "All glories to Śrī Kṛṣṇa saṅkīrtana!" If one wants to derive the actual benefit from this human form, he must take to the chanting of the holy name of the Lord.