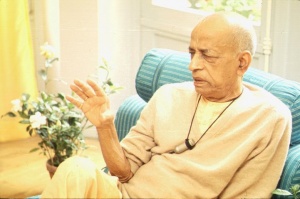 O Vṛtrāsura, demons are generally conducted by the mode of passion. Therefore, what a great wonder it is that although you are a demon, you have adopted the mentality of a devotee and have fixed your mind on the Supreme Personality of Godhead, Vāsudeva, who is always situated in pure goodness.

King Indra wondered how Vṛtrāsura could have been elevated to the position of an exalted devotee. As for Prahlāda Mahārāja, he was initiated by Nārada Muni, and therefore it was possible for him to become a great devotee, although he was born in a family of demons. For Vṛtrāsura, however, Indra could not detect such causes. Therefore he was struck with wonder that Vṛtrāsura was such an exalted devotee that he could fix his mind without deviation upon the lotus feet of Lord Kṛṣṇa, Vāsudeva.