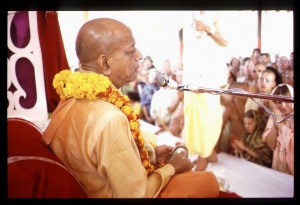 Bhārata-varṣa offers the proper land and circumstances in which to execute devotional service, which can free one from the results of jñāna and karma. If one obtains a human body in the land of Bhārata-varṣa, with clear sensory organs with which to execute the saṅkīrtana-yajña, but in spite of this opportunity he does not take to devotional service, he is certainly like liberated forest animals and birds that are careless and are therefore again bound by a hunter.

In the land of Bhārata-varṣa one can very easily perform the saṅkīrtana-yajña, which consists of śravaṇaṁ kīrtanaṁ viṣṇoḥ (SB 7.5.23), or one can perform other methods of devotional service, such as smaraṇaṁ vandanaṁ arcanaṁ dāsyaṁ sakhyam and ātma-nivedanam. In Bhārata-varṣa one has the opportunity to visit many holy places, especially Lord Caitanya's birthsite and Lord Kṛṣṇa's birthsite-Navadvīpa and Vṛndāvana—where there are many pure devotees who have no desire other than to execute devotional service (anyābhilāṣitā-śūnyaṁ jñāna-karmādy-anāvṛtam (CC Madhya 19.167)), and one may thus become free from the bondage of material conditions. Other paths, such as the path of jñāna and the path of karma, are not very profitable. Pious activities can elevate one to the higher planetary systems, and by speculative knowledge one can merge into the Brahman existence, but that is not real profit, for one has to come down again even from the liberated condition of being merged in Brahman, and certainly one must come down from the heavenly kingdom. One should endeavor to go back home, back to Godhead (yānti mad-yājino 'pi mām (BG 9.25)). Otherwise there is no difference between human life and the lives of jungle animals and birds. Animals and birds also have freedom, but because of their lower birth, they cannot use it. Taking advantage of all the facilities offered him, a human being who has taken birth in the land of Bhārata-varṣa should become a fully enlightened devotee and go back home, back to Godhead. This is the subject matter of the Kṛṣṇa consciousness movement. The inhabitants of places other than Bhārata-varṣa have facilities for material enjoyment, but they do not have the same facility to take to Kṛṣṇa consciousness. Therefore Śrī Caitanya Mahāprabhu has advised that one who has taken birth as a human being in Bhārata-varṣa must first realize himself as a part and parcel of Kṛṣṇa, and after taking to Kṛṣṇa consciousness, he must distribute this knowledge all over the world.