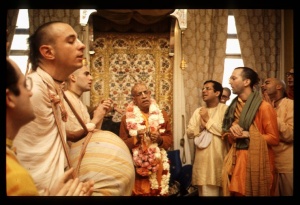 The so-called happy materialistic person is constantly having to endure the threefold miseries of life, called adhidaivika, adhyātmika and adhibhautika. Actually no one can counteract these threefold miseries. All three may assail one at one time, or one misery may be absent and the other present. Thus the living entity is full of anxiety, fearing misery from one side or the other. The conditioned soul must be disturbed by at least one of these three miseries. There is no escape.