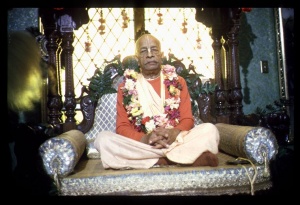 The eyes, nostrils and ears are pairs of gates situated in one place. The mouth, genital and rectum are also different gates. Being placed into a body having these nine gates, the living entity acts externally in the material world and enjoys sense objects like form and taste.

Not being aware of his spiritual position, the living entity, directed by the mind, goes out through the nine gates to enjoy material objects. Because of long association with material objects, he forgets his real spiritual activities and is thus misled. The entire world is going on being misled by so-called leaders like scientists and philosophers, who have no knowledge of the spirit soul. Thus the conditioned soul becomes more and more entangled.