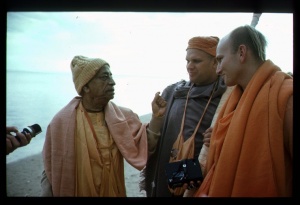 Thus for the sake of a son for King Aṅga, they decided to offer oblations to Lord Viṣṇu, who is situated in the hearts of all living entities.

According to sacrificial rituals, animals are sometimes sacrificed in the yajña arena. Such animals are sacrificed not to kill them but to give them new life. Such action was an experiment to observe whether the Vedic mantras were being properly pronounced. Sometimes small animals are killed in a medical laboratory to investigate therapeutic effects. In a medical clinic, the animals are not revived, but in the yajña arena, when animals were sacrificed, they were again given life by the potency of Vedic mantras. The word śipi-viṣṭāya appears in this verse. Śipi means "the flames of the sacrifice." In the sacrificial fire if the oblations are offered into the flames, then Lord Viṣṇu is situated there in the form of the flames. Therefore Lord Viṣṇu is known as Śipiviṣṭa.