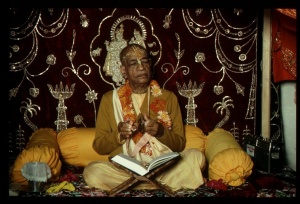 The material modes—goodness, passion and ignorance—whose permutations are observed within a person's mind, are set into motion by the power of time.

The four ages described in these verses are manifestations of various modes of material nature. The age of truth, Satya-yuga, manifests the predominance of material goodness, and Kali-yuga manifests the predominance of ignorance. According to Śrīla Viśvanātha Cakravartī Ṭhākura, within each age the other three ages occasionally manifest as sub-ages. Thus even within Satya-yuga a demon in the mode of ignorance may appear, and within the age of Kali the highest religious principles may flourish for some time. As described in Śrīmad-Bhāgavatam, the three modes of nature are present everywhere and in everything, but the predominant mode, or combination of modes, determines the general character of any material phenomenon. In each age, therefore, the three modes are present in varying proportions. The particular age represented by goodness (Satya), passion (Tretā), passion and ignorance (Dvāpara) or ignorance (Kali) exists within each of the other ages as a subfactor.