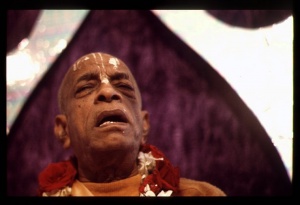 Men and women will live together merely because of superficial attraction, and success in business will depend on deceit. Womanliness and manliness will be judged according to one's expertise in sex, and a man will be known as a brāhmaṇa just by his wearing a thread.

Just as human life as a whole has a great and serious purpose—namely spiritual liberation—fundamental human institutions such as marriage and child-rearing should also be dedicated to that great objective. Unfortunately, in the present age the satisfaction of the sex impulse has become the overriding, if not the exclusive, reason for marriage.

The sexual impulse, which induces the male and female of almost every species to combine physically, and in higher species also emotionally, is ultimately not a natural urge, because it is based on the unnatural identification of the self with the body. Life itself is a spiritual phenomenon. It is the soul that lives and gives apparent life to the biological machine called the body. Consciousness is the soul's manifest energy, and thus consciousness, awareness itself, is originally an entirely spiritual event. When life, or consciousness, is confined within a biological machine and falsely mistakes itself to be that machine, material existence occurs and sex desire arises.

God intends human life to be an opportunity for us to rectify this illusory mode of existence and return to the vast satisfaction of pure, godly existence. But because our identification with the material body is a long historical affair, it is difficult for most people to immediately break free from the demands of the materially molded mind. Therefore the Vedic scriptures prescribe sacred marriage, in which a so-called man and a so-called woman may combine in a regulated, spiritual marriage sheltered by overarching religious injunctions. In this way the candidate for self-realization who has selected family life can derive adequate satisfaction for his senses and simultaneously please the Lord within his heart by obeying religious injunctions. The Lord then purifies him of material desire.

In Kali-yuga this deep understanding has been almost lost, and, as stated in this verse, men and women combine like animals, solely on the basis of mutual attraction to bodies made of flesh, bone, membrane, blood and so on. In other words, in our modern, godless society the weak, superficial intelligence of humanity rarely penetrates beyond the gross physical covering of the eternal soul, and thus family life has in most cases lost its highest purpose and value.

A corollary point established in this verse is that in the age of Kali a woman is considered "a good woman" if she is sexually attractive and, indeed, sexually efficient. Similarly, a sexually attractive man is "a good man." The best example of this superficiality is the incredible attention twentieth-century people give to materialistic movie stars, music stars and other prominent figures in the entertainment industry. In fact, pursuing sexual experiences with various types of bodies is similar to drinking old wine from new bottles. But few people in the Kali-yuga can understand this.

Finally, this verse states that in the age of Kali a man will become known as a priest, or brāhmaṇa, merely by wearing ceremonial dress. In India, brāhmaṇas wear a sacred thread, and in other parts of world members of the priestly class have other ornaments and symbols. But in the age of Kali the symbols alone will suffice to establish a person as a religious leader, despite his ignorance of God.