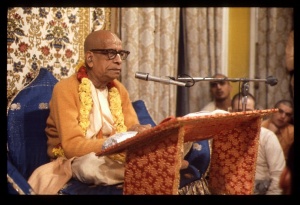 When the Supreme Personality of Godhead descends to the material world, He generally observes the Vedic regulative duties to set a proper example for mankind. The Lord acts by His own free will, since no one can oblige, force or impel the Supreme Personality of Godhead. Similarly, the jñānī, or self-realized soul, is fixed on the spiritual platform, beyond the material body, and should therefore execute the regulative duties in relation to the material body by his own free will and not as a servant of the rules and regulations. A self-realized soul is a servant of Lord Kṛṣṇa and not of rules and regulations. Nevertheless, a transcendentalist strictly complies with regular duties for the pleasure of the Supreme Lord. In other words, one who is advanced in loving devotional service to Lord Kṛṣṇa spontaneously moves according to the will of the Supreme. One who is perfectly situated in spiritual realization cannot become a servant of the material body or of rules and regulations concerning the material body. However, this verse and other similar statements in Vedic scriptures should not be ignorantly misinterpreted to justify immoral, whimsical behavior. Lord Kṛṣṇa is discussing the paramahaṁsa stage of life, and those who are attached to the material body have nothing to do with this paramahaṁsa stage, nor should they exploit its unique privileges and status.