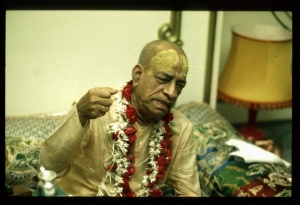 Mother Yaśodā was always overwhelmed by intense love for Kṛṣṇa, not knowing who Kṛṣṇa was or how powerful He was. Because of maternal affection for Kṛṣṇa, she never even cared to know who He was. Therefore, when she saw that her son had become excessively afraid, she threw the stick away and desired to bind Him so that He would not commit any further naughty activities.

Mother Yaśodā wanted to bind Kṛṣṇa not in order to chastise Him but because she thought that the child was so restless that He might leave the house in fear. That would be another disturbance. Therefore, because of full affection, to stop Kṛṣṇa from leaving the house, she wanted to bind Him with rope. Mother Yaśodā wanted to impress upon Kṛṣṇa that since He was afraid merely to see her stick, He should not perform such disturbing activities as breaking the container of yogurt and butter and distributing its contents to the monkeys. Mother Yaśodā did not care to understand who Kṛṣṇa was and how His power spreads everywhere. This is an example of pure love for Kṛṣṇa.