Srimad-Bhagavatam - Tenth Canto - Chapter 35: The Gopīs Sing of Kṛṣṇa as He Wanders in the Forest 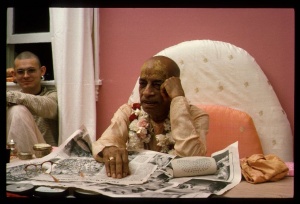 Śrī Śukadeva Gosvāmī said: O King, thus during the daytime the women of Vṛndāvana took pleasure in continuously singing about the pastimes of Kṛṣṇa, and those ladies' minds and hearts, absorbed in Him, were filled with great festivity.

This verse definitely confirms that the so-called pain of the heartbroken gopīs is actually great spiritual bliss. On the material platform, pain is pain—period. But on the spiritual platform, so-called pain is simply a different variety of spiritual ecstasy. In the Western countries, people take pleasure in mixing different flavors of ice cream to produce wonderful combinations of flavor. Similarly, on the spiritual platform Śrī Kṛṣṇa and His devotees expertly mix the flavors of spiritual bliss, and thus every day was a treat for the gopīs.

Thus end the purports of the humble servants of His Divine Grace A.C. Bhaktivedanta Swami Prabhupāda to the Tenth Canto, Thirty-fifth Chapter, of the Śrīmad-Bhāgavatam, entitled "The Gopīs Sing of Kṛṣṇa as He Wanders in the Forest."