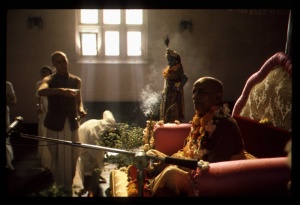 Devakī then kept within herself the Supreme Personality of Godhead, the cause of all causes, the foundation of the entire cosmos, but because she was under arrest in the house of Kaṁsa, she was like the flames of a fire covered by the walls of a pot, or like a person who has knowledge but cannot distribute it to the world for the benefit of human society.

In this verse the word jñāna-khala is most significant. Knowledge is meant for distribution. Although there is already much scientific knowledge, whenever scientists or philosophers awaken to a particular type of knowledge, they try to distribute it throughout the world, for otherwise the knowledge gradually dries up and no one benefits from it. India has the knowledge of Bhagavad-gītā, but unfortunately, for some reason or other, this sublime knowledge of the science of God was not distributed throughout the world, although it is meant for all of human society. Therefore Kṛṣṇa Himself appeared as Śrī Caitanya Mahāprabhu and ordered all Indians to take up the cause of distributing the knowledge of Bhagavad-gītā throughout the entire world.