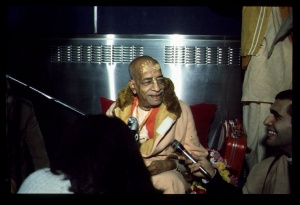 Those words which do not describe the glories of the Lord, who alone can sanctify the atmosphere of the whole universe, are considered by saintly persons to be like unto a place of pilgrimage for crows. Since the all-perfect persons are inhabitants of the transcendental abode, they do not derive any pleasure there.

Crows and swans are not birds of the same feather because of their different mental attitudes. The fruitive workers or passionate men are compared to the crows, whereas the all-perfect saintly persons are compared to the swans. The crows take pleasure in a place where garbage is thrown out, just as the passionate fruitive workers take pleasure in wine and woman and places for gross sense pleasure. The swans do not take pleasure in the places where crows are assembled for conferences and meetings. They are instead seen in the atmosphere of natural scenic beauty where there are transparent reservoirs of water nicely decorated with stems of lotus flowers in variegated colors of natural beauty. That is the difference between the two classes of birds.

Nature has influenced different species of life with different mentalities, and it is not possible to bring them up into the same rank and file.

Similarly, there are different kinds of literature for different types of men of different mentality. Mostly the market literatures which attract men of the crow's categories are literatures containing refused remnants of sensuous topics. They are generally known as mundane talks in relation with the gross body and subtle mind. They are full of subject matter described in decorative language full of mundane similes and metaphorical arrangements. Yet with all that, they do not glorify the Lord. Such poetry and prose, on any subject matter, is considered decoration of a dead body. Spiritually advanced men who are compared to the swans do not take pleasure in such dead literatures, which are sources of pleasure for men who are spiritually dead. These literatures in the modes of passion and ignorance are distributed under different labels, but they can hardly help the spiritual urge of the human being, and thus the swanlike spiritually advanced men have nothing to do with them. Such spiritually advanced men are called also mānasa because they always keep up the standard of transcendental voluntary service to the Lord on the spiritual plane. This completely forbids fruitive activities for gross bodily sense satisfaction or subtle speculation of the material egoistic mind.

Social literary men, scientists, mundane poets, theoretical philosophers and politicians who are completely absorbed in the material advancement of sense pleasure are all dolls of the material energy. They take pleasure in a place where rejected subject matters are thrown. According to Svāmī Śrīdhara, this is the pleasure of the prostitute-hunters.

But literatures which describe the glories of the Lord are enjoyed by the paramahaṁsas who have grasped the essence of human activities.