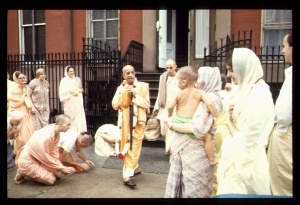 In this second division of Bhakti-rasāmṛta-sindhu the author offers his respectful obeisances unto "Sanātana." This Sanātana can be interpreted as either Śrī Kṛṣṇa Himself or as Sanātana Gosvāmī, the elder brother and spiritual master of Rūpa Gosvāmī. In the case where Sanātana is accepted to mean Śrī Kṛṣṇa, the obeisances are offered to Kṛṣṇa because He is naturally so beautiful and because He is the killer of the demon Agha. If it is interpreted to mean Sanātana Gosvāmī, then it is because he is so greatly favored by Rūpa Gosvāmī, being always served by him, and because he is the annihilator of all kinds of sinful activities. In this division of Bhakti-rasāmṛta-sindhu the author wants to describe the general symptoms of the transcendental mellow (loving mood) of discharging devotional service.

The word rasa, used in the Bhakti-rasāmṛta-sindhu, is understood by different persons differently because the exact English equivalent is very difficult to find. But as we have seen our spiritual master translate this word rasa into "mellow," we shall follow in his footsteps and also translate the word in that way.

The particular loving mood or attitude relished in the exchange of love with the Supreme Personality of Godhead is called rasa, or mellow. The different types of rasa, when combined together, help one to taste the mellow of devotional service in the highest degree of transcendental ecstasy. Such a position, although entirely transcendental to our experience, will be explained in this section as far as possible, following in the footsteps of Śrīla Rūpa Gosvāmī.

Without relishing some sort of mellow or loving mood in one's activities, no one can continue to perform such activities. Similarly, in the transcendental life of Kṛṣṇa consciousness and devotional service there must be some mellow or specific taste from the service. Generally this mellow is experienced by chanting, hearing, worshiping in the temple and being engaged in the service of the Lord. So when a person feels transcendental bliss, that is called "relishing the mellow." To be more clear, we may understand that the various feelings of happiness derived from discharging devotional service may be termed the "mellows" of devotional service.

The gradual process of development to the stage of devotional service is explained in the Śrīmad-Bhāgavatam, First Canto: "The beginning is to hear about Lord Kṛṣṇa in the association of devotees who have themselves cleansed their hearts by association. Hearing about the transcendental activities of the Lord will result in one's feeling transcendental bliss always." It is also explained in the Bhagavad-gītā that for one who has actually come to the spiritual platform, the first symptom visible will be that he is always joyful. This joyous life is attained by one's reaction to reading the Bhagavad-gītā or Śrīmad-Bhāgavatam, or else from associating with persons who are very interested in the spiritual life of Kṛṣṇa consciousness—specifically those who have made the determination to achieve the favor of Govinda by being engaged in transcendental loving service at His lotus feet. Being encouraged by such a feeling, one who is constantly engaged in discharging the regulative principles of devotional service in such a way as to please the Supreme Personality of Godhead develops two principles of compelling force, which come under the heading of vibhāva. Thus one enjoys transcendental bliss.

There are several origins or causes for this compulsive love of Kṛṣṇa, such as Kṛṣṇa Himself, the devotees of Kṛṣṇa, Kṛṣṇa's playing on the flute, etc. The effect is sometimes loving and sometimes stunted.

There are eight transcendental symptoms found in the body during ecstasy, and all of them are possible only by a mixture of the above-mentioned five ecstatic divisions. Without some mixture of these five ecstatic principles, one cannot relish transcendental bliss. The cause or basis for relishing transcendental mellow is exactly what we mean by vibhāva. This vibhāva is divided into two—namely, basic and impetuous. In the Agni Purāṇa the description of vibhāva is given as follows: "The basis from which ecstatic love is born is called vibhāva, which is divided into two—basic and impetuous." In other words, there are two kinds of ecstatic love. The object of basic ecstatic love is Kṛṣṇa and His devotee. Lord Kṛṣṇa is the object of basic ecstatic love, and His pure devotee, a reservoir of such love, is the object of impetuous ecstatic love. Impetuous ecstatic love, then, is that love which develops when one sees an object which reminds him of Kṛṣṇa.

Lord Kṛṣṇa, who is the possessor of inconceivable potencies and qualities of transcendental knowledge and bliss, is the basic cause of ecstatic love. Lord Kṛṣṇa also becomes the reservoir (impetus) of ecstatic love by His different incarnations and expansions. In the Śrīmad-Bhāgavatam there is a statement in connection with the brahma-vimohana-līlā, which demonstrates something of this impetuous feature of ecstatic love. When Brahmā was deluded by Kṛṣṇa, who expanded Himself into so many cowherd boys, calves and cows, Kṛṣṇa's elder brother, Śrī Baladeva (a direct expansion of Kṛṣṇa Himself), felt astonishment and said, "How wonderful it is that my ecstatic love for Kṛṣṇa is again being attracted to so many cowherd boys, calves and cows!" He was struck with wonder by thinking in this way. This is one of the examples in which Kṛṣṇa Himself becomes the object and reservoir of ecstatic love in the impetuous aspect.