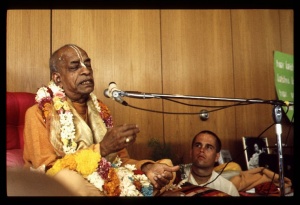 Prabhupāda: Now nobody can. After, no darśana.

Prabhupāda: Yes. That's all. Where is Tamāla Kṛṣṇa?

Satsvarūpa: Shall I call him?

Ādi-keśava: I was wondering. I've been . . . while in New York I've been worshiping the Deities, Rādhā-Kṛṣṇa, but now, because of this case, I'm forced to travel more between some of the temples, because of the legal work. So I was thinking to take some Deities with me to worship wherever I go.

Prabhupāda: No, no. Sannyāsī is not required.

Prabhupāda: No. A sannyāsī is not required. Caitanya Mahāprabhu, when He was traveling, He was not carrying any Deity. Deity worship is specially recommended for the gṛhasthas. That is compulsory.

Ādi-keśava: In the temples we should always recommend the gṛhasthas to worship the Deity.

Prabhupāda: Hmm. Just like our Rādhā-Dāmodara temple, it was established . . . this temple was established by Jīva Gosvāmī. He was brahmacārī. So how these gosvāmīs, they are worshiping? He had no sons. It was . . . the temple was established by him, but the worship was transferred to the gṛhastha bhaktas. So they are doing by generation. All these Vṛndāvana temples—Govindajī temple, Rādhā-Ramaṇa temple, Rādhā-Dāmodara. Rādhā-Ramaṇa temple, he was also brahmacārī, Gopāla Bhaṭṭa. He did not marry. Jīva Gosvāmī was brahmacārī. Sanātana Gosvāmī and Rūpa Gosvāmī, they sannyāsīs. So how these gṛhasthas got this sevā? They were disciples, that's all, gṛhasthas. So gṛhastha disciples are meant for worshiping Deity. And others, they are meant for preaching. This is the primary principle. So if you are engaged in preaching . . . Deity worship, it must be done in scheduled time: this time, this time, this time. Then that is very difficult for you. Caitanya Mahāprabhu did not do that. He was traveling alone, preaching, preaching. So it will be great burden to carry Deity. But in preaching work, when you are many, you are carrying Deity in the bus. That is good; there are others, some nice engage . . . that is temple life. But personally if you carry some Deity, it will be troublesome. It will be hampering your preaching work.

Prabhupāda: Yes. Make it simplified. At the present moment, especially in the Western countries, it is not possible to follow very elaborate program. But what I have given already, that is sufficient—six times worshiping, ārati, just like here going on, just like the same program. Not to make it difficult thing, because with the advancement of Kali-yuga, more difficulties are coming. So simple. Things should be simplified. That is wanted. (break) Go on preaching from one place to another, another place. Mahā-vicalanam (SB 10.8.4). Mahātmās should walk. Vicalanam, "Movement." Just like I was in Vṛndāvana. If I had not moved, then this movement would not have been started. Because I moved, at the age of seventy years, something is now tangible. So similarly, every sannyāsī should move from place to place. Parivrājakācārya, that is . . . ācārya means teacher, and parivrāja, "Movement." Bhavānanda Mahārāja has become very popular in Bengal. You can move from village to village. People will like you. You can speak little Bengali?

Prabhupāda: That is all right.

Prabhupāda: Tomār kāmanā āche? (laughter) That's . . . āmi bāṅgalā boli nā, bolete pari nā. (Translated from Bengali: I can't speak Bengali very well) They like it, to hear. There is nothing new. If you simply . . . you can read Bengali also?

Prabhupāda: That's all right. Then Bhagavad-gītā, that's all. People like ācāra, behavior. That is main thing. And nobody wants to check you, whether you know Bengali or Hindi. They see the person that, "Here is a Vaiṣṇava." Oh, then it is all right.

Prabhupāda: Hmm. So Acyutānanda has come. You all sannyāsīs may, one or two, remain here. And kīrtana party—Acyutānanda, he has got minibus.

Bhavānanda: Yes, I was going to fill the bus and Your Divine Grace's car and one Abhirāma's car. Jayapatākā Mahārāja is in Calcutta, and he's returning tomorrow morning, so he thought that he would stop in Chakdaha.

Bhavānanda: But we're very, very busy, Jayapatākā and I, because the festival is coming up. Would it be all right if I stayed back? I make all the arrangements, but stay behind to supervise it?

Prabhupāda: Yes, as you think best. (break) . . . heavy duty, to fight with the demons. (chuckles) So on the whole, our book sale is hampered or not for this propaganda?

Tripurāri: I don't think so.

Prabhupāda: That is . . . then it our triumph. You don't mind all this.

Ādi-keśava: . . . because everyone is hearing about Kṛṣṇa.

Prabhupāda: That is our gain. I think it will improve our position.

Prabhupāda: By this agitation our position will be improved. Prahlāda Mahārāja was suppressed in so many means. What was loss on his part? He improved more and more, more and more. If Christ was not crucified, then his cult would not have spread so much all over the world. The Christian cult was spread all over the world after demise of Christ, not during his time. Is it not?

Satsvarūpa: Yes. The history was that there were many . . . at that time there many, many cults, and that was just another cult during the Roman Empire. And then that cult became very, very dominant.

Prabhupāda: Because he was persecuted, his cult became so spread.

Devotee: In Brazil, Śrīla Prabhupāda, we made a twenty minutes' program in television, very, very nice.

Devotee: Yes. Very many saw that. All, the whole Brazil saw that, Pañca-tattva . . .

Prabhupāda: They have captured our books?

Prabhupāda: Why? Argentina is a Communist country?

Devotee: No. They're like a Third World country, Third World. There's a lot of Communists inside the country.

Prabhupāda: Third World? What is that?

Hari-śauri: Third World. They refer to the Arab republics, like that. They call them the Third World.

Prabhupāda: Third World? We have no place there? We want Fourth World? Or what is that? (laughter)

Tripurāri: I think there is more animal slaughter in Argentina than anywhere in the world.

Ādi-keśava: That is the national industry there, cattle slaughter.

Prabhupāda: It has become national industry in Africa also.

Prabhupāda: Therefore the world is suffering, so much sinful activities. The greatest sinful activity is cow slaughter, and they are committing. They do not know what will be the result. Such brain, stool, stool-bound brain. Thorough overhaul is required. That we are doing. Otherwise the stool cannot be cleansed.