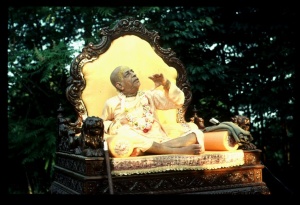 Prabhupāda: . . . can dance, and as soon as you say, "Chant Hare Kṛṣṇa and dance," immediately they reject.

Gopāla Kṛṣṇa: Stop. They spend hours and hours practicing how to learn to dance. They go through so much tapasya.

Indian man (1): In Mauritius on Diwali there was a very big festival the government arranged. There were more than forty thousand people, and they got one singer, Mukesh, from India, especially for that program. So when he was singing, everybody was making noise. As soon as the Hare Kṛṣṇa people went on the stage, everybody become quiet. Everybody was clapping, they were telling me. (break)

Prabhupāda: This corner is something American?

Tejiyas: This is also part of the Bharatiya kalākendra now. The U.S.I.S. used to be here, American information . . . (break)

Gopāla Kṛṣṇa: New Delhi is a very social city. There are a lot of kalākendras, so there's a lot of active . . .

Prabhupāda: No work. Especially in this country. Sixty percent of the government servants, they sleep. They do not do anything. I have seen it.

Prabhupāda: Gossiping, that's all. And keeping the files thrown away. If you want some reference, it will take three months.

Tejiyas: That one devotee who was given brāhmaṇa initiation, he was working in the government. So previously he would just go in the morning, and sometimes he wouldn't even go. His section officer would go . . . one of them would go and punch in, and the rest of the day . . . they have no work even. And then in the evening one has to cover the punch-out. That's the only thing.

Harikeśa: In the communistic system everybody works very hard.

Gopāla Kṛṣṇa: That's what they claim. But everything belongs to the state. Why should they work hard?

Ambarīṣa: They work very hard because they have a gun pointed at their head.

Gopāla Kṛṣṇa: Now the Russians are gradually trying to change to the American system in the sense that if a worker produces more, he is given some bonus. They are trying to give incentives to the workers so that they are tempted to work hard.

Ambarīṣa: That's why the Chinese and the Russians . . .

Prabhupāda: But what they will do with the money?

Prabhupāda: Then where is equality?

Ambarīṣa: That's why the Chinese and the Russians, they don't get along. The Chinese say that the Russians have diverted from Marxism.

Prabhupāda: They will have to divert because both, either Chinese or Russian, these are all rascaldom. It is not perfect system.

Gopāla Kṛṣṇa: But the chairman of the Russian Communist Party, Mr. Brezhnev, he has about fifteen foreign cars. Each time a foreign dignitary goes, he gives him a special car. So everyone is supposed to be equal, but he is not equal. He has fifteen cars for himself. (break)

Prabhupāda: . . . clean. (break) It is not the same New Delhi as five or ten years before. Huh?

Prabhupāda: How long you are here?

Tejiyas: Five years, four and a half years.

Prabhupāda: So what do you think?

Harikeśa: Vṛndāvana is much cleaner than this, and they are supposed to be very poor.

Prabhupāda: Because in Vṛndāvana there are less rascals, and here it is full of rascals. That is the difference. Harāv abhaktasya kuto mahad-guṇāḥ (SB 5.18.12). Rascal means the nondevotees. They have no good qualification. Kuto: "Where is good qualification?" And "No, they are so civilized. They are educated." But the answer is, mano-rathena: "Whatever they may be, they are on the mental platform." Mano-rathenāsati dhāvato bahiḥ: "Because they are on the mental platform, certainly they will hover over the external energy. Therefore they have no good qualification." Bahir-artha-maninaḥ. Simply speculating on the external feature.

Prabhupāda: Paraṁ gatim. They do not take instruction from the śāstra; therefore everything is failure.

Prabhupāda: Neither in USA. (laughter)

Gopāla Kṛṣṇa: No one is happy in the material world.

Ambarīṣa: In America there is much more violence than there is here.

Gopāla Kṛṣṇa: I read in the papers yesterday that the crime rate has gone up in United States.

Prabhupāda: Yes. That must. If everyone is a criminal, so how the crime rate can decrease?

Harikeśa: Everybody cheats as much as possible, on income tax and everything.

Gopāla Kṛṣṇa: Even President Nixon had cheated on his income tax return, but they caught him later on.

Gopāla Kṛṣṇa: Previously the governments all over the world would guarantee that for behind every currency there was certain amount of gold.

Gopāla Kṛṣṇa: But now it's no more. Now if you go with that currency the government won't give you gold. They've reduced the gold backing behind the currency now. Every day they're reducing, because when they want money they just print more notes.

Prabhupāda: And you cannot hold gold also. That is illegal. Somehow or other, even if you secure gold, you cannot keep it.

Gopāla Kṛṣṇa: There's that restriction in India, I think.

Ambarīṣa: Now in the United States you can buy gold.

Ambarīṣa: They made it legal.

Prabhupāda: They do not believe in the transmigration of the soul, and they are "awake." Just see these rascals. They have no preliminary knowledge even, and they are writing books, Awake.

Harikeśa: They say the world is going to end next year.

Harikeśa: Then they also say if it doesn't end next year, that it's Biblically correct to say that it may end in three years after that, because last prediction . . .

Gopāla Kṛṣṇa: We can ask them to sell their press to us because the world is going to end.

Prabhupāda: No, give us free.

Gopāla Kṛṣṇa: They have a huge press.

Haṁsadūta: We can make a wager with them. If it doesn't end, then they have to surrender their press. (laughter)

Prabhupāda: How much they are in darkness, and they are making propaganda, "Awake." This is going on. Andhā yathāndhair upanīya . . . one blind man is awakening other blind men. (break) . . . kalākendra.

Gopāla Kṛṣṇa: All kalākendras are supported by businessmen. They would much rather support a kalākendra rather than the temple, because they think . . .

Prabhupāda: Temple is useless now. You see, Nanda has spent so much money in that Kurukṣetra, and not a single temple. You see?

Indian man (1): Even they can't worship as we are worshiping.

Prabhupāda: How they can worship? The worship is done by devotee. Unless you create devotee, where is the question of worship? Without devotee it is idol worship. There is no life. And without life, how can you pull on artificially? Aprāṇasya hi dehasya mandanam loka-rañjanam. Which way I shall go?

Harikeśa: In the back of that Awake magazine there was one little article that said that this one teacher in one college was doing yoga. He locked himself up in his room and went into a yogic trance, and they finally broke into his room two days later and found him in the same position, but dead. So then they say that because he was in yogic trance that his heart was going too slow to give sufficient blood to the body, so he died.

Prabhupāda: So by yoga practice he died.

Harikeśa: Yes, that's what they're saying.

Prabhupāda: The result is he's died.

Ambarīṣa: That's what my father, he read that article, and that's what he says to me. He says, "You do yoga and you'll end up like this man."

Gopāla Kṛṣṇa: These buses are also so old.

Prabhupāda: Old and creating sound so much.

Tejiyas: They are losing several crores of rupees every year. One man told me that he rents buses to them, one of the men who came two, three days ago. So, he was telling me before, he rents buses to the D.T.C., to the Delhi Transportation Corporation. He rents it to them for a rupee a kilometer, and he makes about forty paisa. And even though they are getting it for a rupee a kilometer, they are still losing money on it. He is making profit and they are losing it. Because they sell the spare parts. They're so corrupt.

Tejiyas: Yes, the workers there . . . there's about sixty percent of their buses only, running. Forty percent are disabled because they are always losing the parts somehow.

Gopāla Kṛṣṇa: Also, I know, in Delhi, what the people do is . . . a lot of people, they don't buy the ticket. They give the conductor half the money, and so he lets them go free.

Prabhupāda: Just see. Then where the income? There is no income and there is loss.

Gopāla Kṛṣṇa: Not everyone does it, but students and a lot of young people do that.

Tejiyas: Students coerce them. They stop the buses. If the bus driver doesn't stop, they'll break the windows and then they all get on and they ride free. They were burning many buses a few years ago.

Gopāla Kṛṣṇa: But this year, because of the Emergency, everyone is behaving all right. They're scared to do anything.

Prabhupāda: How by Emergency you can make people honest?

Prabhupāda: This house belongs to the Dalmia's . . .

Tejiyas: This belongs to R.K. Dalmia.

Tejiyas: He had seven wives.

Tejiyas: A house for each wife, I think.

Tejiyas: All his children are avowed atheists.

Prabhupāda: Means children are born by others. He feeds them, that's all. This is going on. (break) It is easily calculated that government will collapse very soon. They have made changes because they cannot manage.

Tejiyas: Every six months they've been changing the ministers.

Gopāla Kṛṣṇa: They do this all over the world. They change . . . like in America, President Ford just dropped the Defense Secretary just like that. So that created such a big controversy.

Haṁsadūta: I read a very interesting article, and the theme was that once a month, every month at least, one government is now collapsing or being overthrown. That was the theme of the article.

Gopāla Kṛṣṇa: Now Dr. Chenna Reddy must have become busy, because when the presidents rule then the governor has to do some work. Otherwise in India the governors, they do no work.

Haṁsadūta: In America in the upcoming elections, in 1976, one of the biggest candidates is a movie actor, Ronald Reagan. Yes.

Haṁsadūta: For presidentship. And he stands a very good chance of winning.

Tejiyas: . . . tax division, the clerks will come to the various businessmen after they make their first application, and they will tell them . . . first they will come to them. And immediately a businessman knows, so he gives him 500,000 rupees. And he will say, "Oh, thank you very much. I just came to see you. I wanted to tell you that if you say like this, you will save ten thousand, twenty thousand rupees. But don't say when you are there that I told you." (pause) (end).