741212 - Letter to Satadhanya written from Bombay 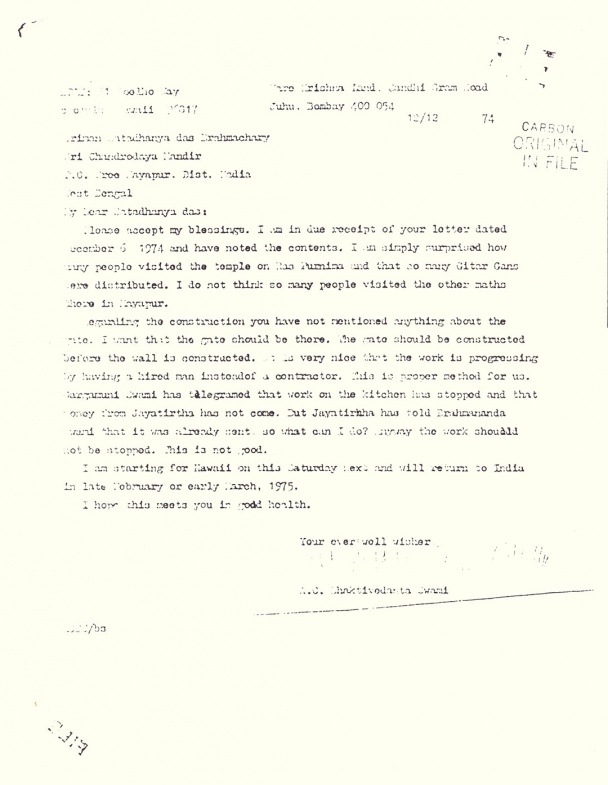 Sriman Satadhanya das Brahmachary
Sri Chandrodaya Mandir
P.O Sree Mayapur. Dist. Nadia
West Bengal
My Dear Satadhanya das:
Please accept my blessings. I am in due receipt of your letter dated December 6, 1974 and have noted the contents. I am simply surprised how many people visited the temple on Ras Purnima and that so many Gitar Gans were distributed. I do not think so many people visited the other maths there in Mayapur.
Regarding the construction you have not mentioned anything about the gate. I want that the gate should be there. The gate should be constructed before the wall is constructed. It is very nice that the work is progressing by having a hired man instead of a contractor. This is proper method for us. Gargamuni Swami has telegrammed that work on the kitchen has stopped and that money from Jayatirtha has not come. But Jayatirtha has told Brahmananda Swami that it was already sent. So what can I do? Anyway the work should not be stopped. This is not good.
I am starting for Hawaii on this Saturday next and will return to India in late February or early March, 1975.
I hope this meets you in good health.