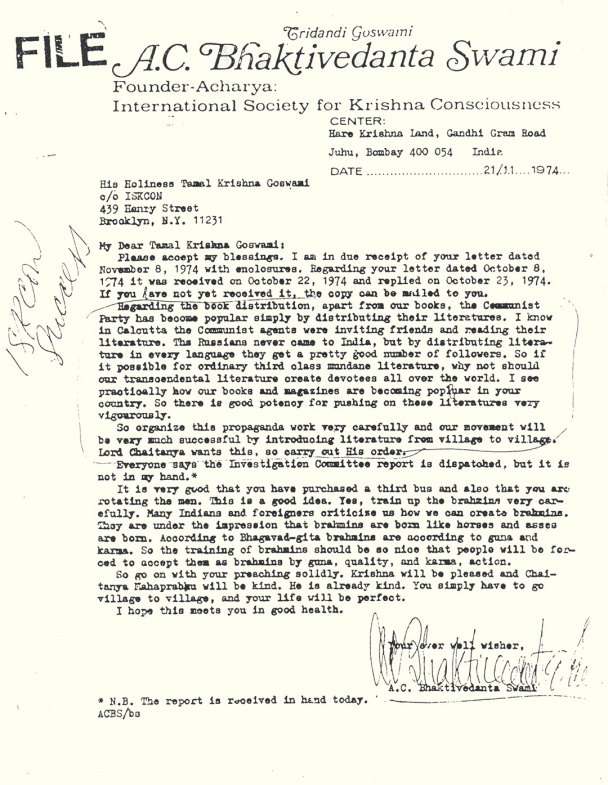 My Dear Tamal Krishna Goswami:
Please accept my blessings. I am in due receipt of your letter dated November 8, 1974 with enclosures. Regarding your letter dated October 8, 1974 it was received on October 22, 1974 and replied on October 23, 1974. If you have not yet received it, the copy can be mailed to you.
Regarding the book distribution, apart from our books, the Communist Party has become popular simply by distributing their literature's. I know in Calcutta the Communist agents were inviting friends and reading their literature. The Russians never came to India, but by distributing literature in every language they get a pretty good number of followers. So if it is possible for ordinary third class mundane literature, why not should our transcendental literature create devotees all over the world. I see practically how our books and magazines are becoming popular in your country. So there is good potency for pushing on these literatures very vigorously.
So organize this propaganda work very carefully and our movement will be very much successful by introducing literature from village to village. Lord Chaitanya wants this, so carry out His order.
Everyone says the Investigation Committee report is dispatched, but it is not in my hand.*
It is very good that you have purchased a third bus and also that you are rotating the men. This is a good idea. Yes, train up the brahmins very carefully. Many Indians and foreigners criticize us how we can create brahmins. They are under the impression that brahmins are born like horses and asses are born. According to Bhagavad-gita brahmins are according to guna and karma. So the training of brahmins should be so nice that people will be forced to accept them as brahmins by guna, quality, and karma, action.
So go on with your preaching solidly. Krishna will be pleased and Chaitanya Mahaprabhu will be kind. He is already kind. You simply have to go village to village, and your life will be perfect.
I hope this meets you in good health.