731018 - Letter to Kirtanananda written from Bombay 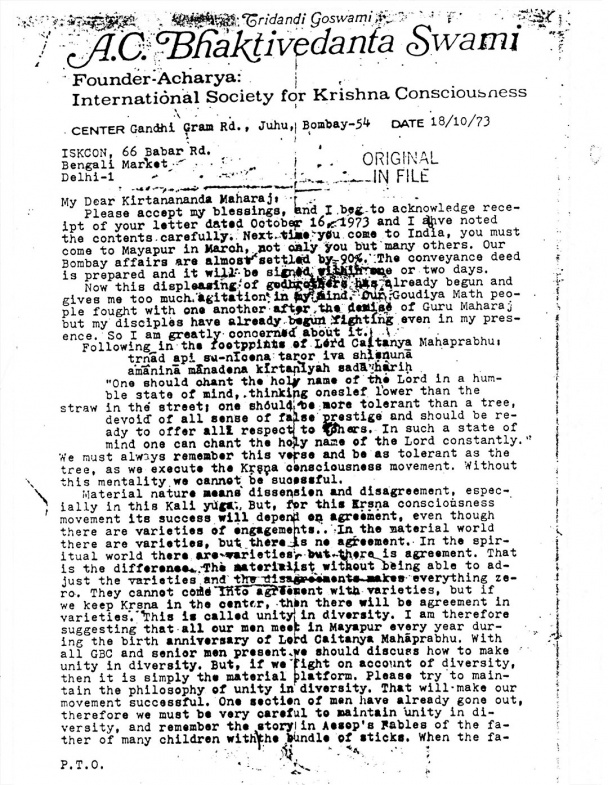 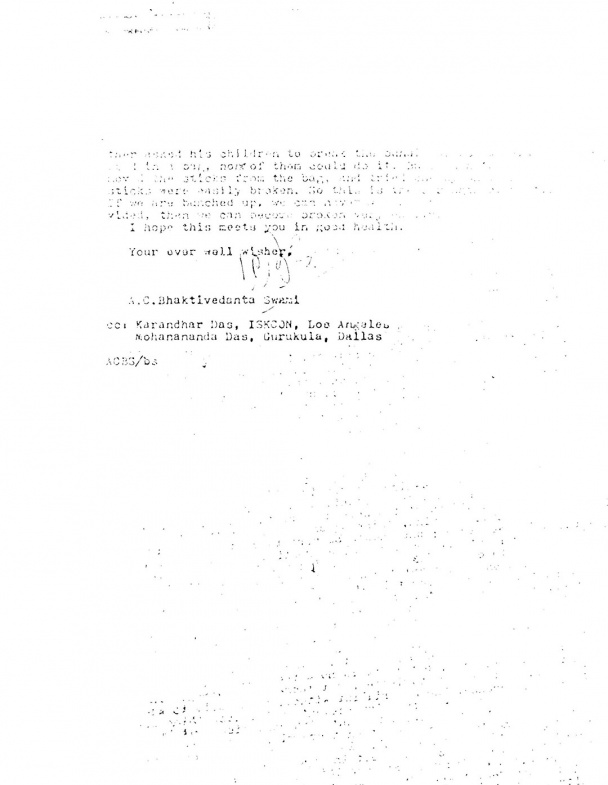 My Dear Kirtanananda Maharaj:
Please accept my blessings, and I beg to acknowledge receipt of your letter dated October 16, 1973 and I have noted the contents carefully. Next time you come to India, you must come to Mayapur in March, not only you but many others. Our Bombay affairs are almost settled by 90%. The conveyance deed is prepared and it will be signed within one or two days.
Now this displeasing of godbrothers has already begun and gives me too much agitation in my mind. Our Goudiya Math people fought with one another after the demise of Guru Maharaj but my disciples have already begun fighting even in my presence. So I am greatly concerned about it.
Following in the footprints of Lord Caitanya Mahaprabhu:
trnad api su-nicena taror iva sahisnuna
amanina manadena kirtaniya sada harih
"One should chant the holy name of the Lord in a humble state of mind, thinking oneself lower than the straw in the street; one should be more tolerant than a tree, devoid of all sense of false prestige and should be ready to offer all respect to others. In such a state of mind one can chant the holy name of the Lord constantly."
We must always remember this verse and be as tolerant as the tree, as we execute the Krsna consciousness movement. Without this mentality we cannot be successful.
Material nature means dissension and disagreement, especially in this Kali yuga. But, for this Krsna consciousness movement its success will depend on agreement, even though there are varieties of engagements. In the material world there are varieties, but there is no agreement. In the spiritual world there are varieties, but there is agreement. That is the difference. The materialist without being able to adjust the varieties and the disagreements makes everything zero. They cannot come into agreement with varieties, but if we keep Krsna in the center, then there will be agreement in varieties. This is called unity in diversity. I am therefore suggesting that all our men meet in Mayapur every year during the birth anniversary of Lord Caitanya Mahaprabhu. With all GBC and senior men present we should discuss how to make unity in diversity. But, if we fight on account of diversity, then it is simply the material platform. Please try to maintain the philosophy of unity in diversity. That will make our movement successful. One section of men have already gone out, therefore we must be very careful to maintain unity in diversity, and remember the story in Aesop's Fables of the father of many children with the bundle of sticks. When the father asked his children to break the bundle of sticks wrapped in a bag, none of them could do it. But, when they removed the sticks from the bag, and tried one by one, the sticks were easily broken. So this is the strength in unity. If we are bunched up, we can never be broken, but when divided, then we can become broken very easily.
I hope this meets you in good health.