730628 - Letter to Jadurani written from Calcutta 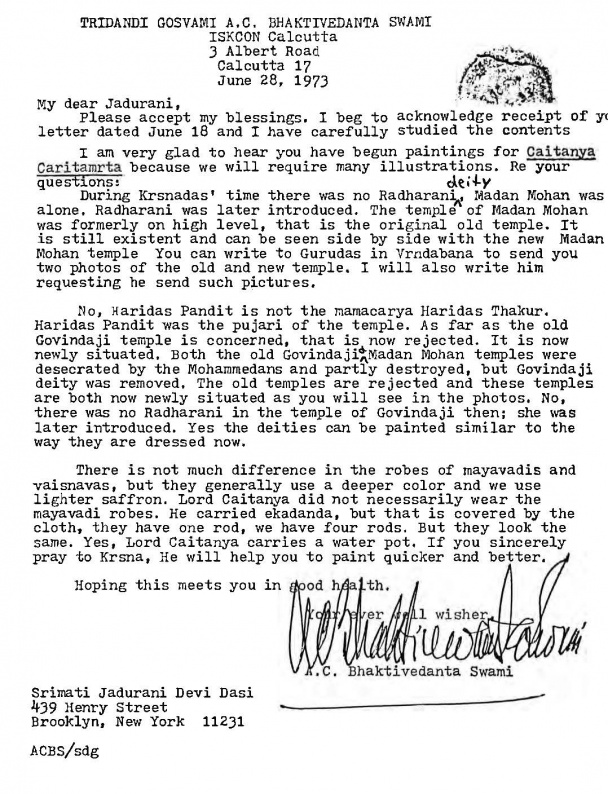 My dear Jadurani,
Please accept my blessings. I beg to acknowledge receipt of your letter dated June 18 and I have carefully studied the contents.

I am very glad to hear you have begun paintings for Caitanya Caritamrta because we will require many illustrations. Re your questions:
During Krsnadasa' time there was no Radharani deity [handwritten], Madan Mohan was alone. Radharani was later introduced. The temple of Madan Mohan was formerly on high level, that is, the original old temple. It is still existent and can be seen side by side with the new Madan Mohan temple. You can write to Gurudas in Vrndabana to send you two photos of the old and new temple. I will also write him requesting he send such pictures.

No, Haridas Pandit is not the namacarya Haridas Thakur. Haridas Pandit was the pujari of the temple. As far as the old Govindaji temple is concerned, that is now rejected. It is now newly situated. Both the old Govindaji and Madan Mohan temples were desecrated by the Mohammedans and partly destroyed, but Govindaji deity was removed. The old temples are rejected and these temples are both now newly situated as you will see in the photos. No, there was no Radharani in the temple of Govindaji then; she was later introduced. Yes the deities can be painted similar to the way they are dressed now.

There is not much difference in the robes of mayavadis and vaisnavas, but they generally use a deeper color and we use lighter saffron. Lord Caitanya did not necessarily wear the mayavadi robes. He carried ekadanda, but that is covered by the cloth, they have one rod, we have four rods. But they look the same. Yes, Lord Caitanya carries a water pot. If you sincerely pray to Krsna, He will help you to paint quicker and better.