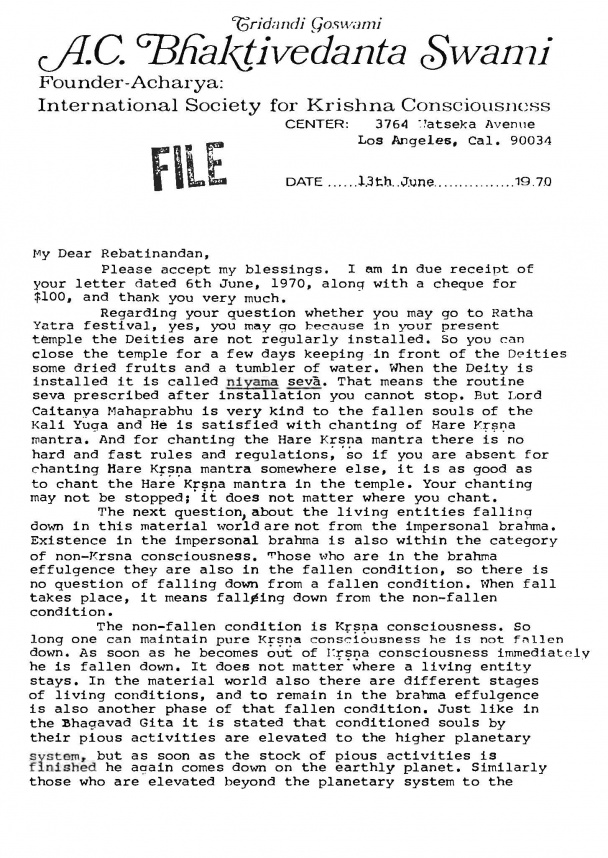 Letter to Rebatinandan (page 1 of 2) 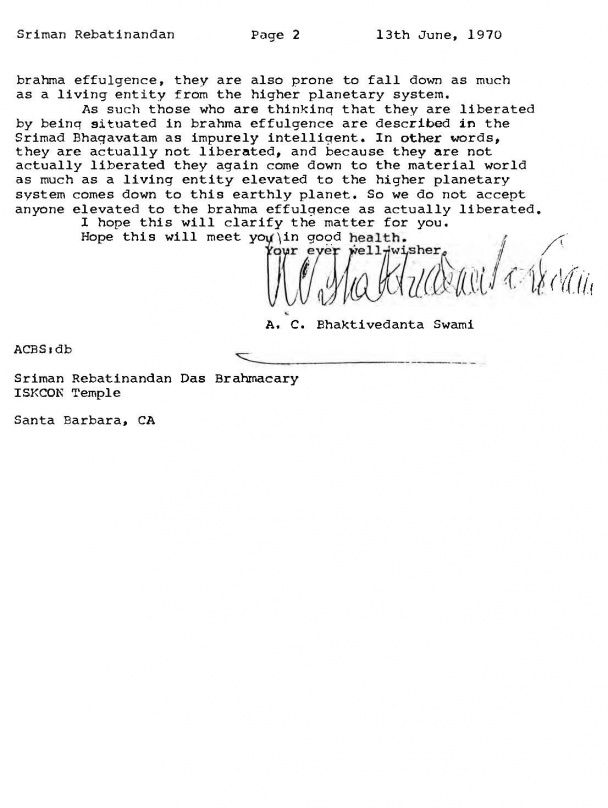 Letter to Rebatinandan (page 2 of 2)


My Dear Rebatinandan,
Please accept my blessings. I am in due receipt of your letter dated 6th June, 1970, along with a cheque for $100, and thank you very much.
Regarding your question whether you may go to Ratha Yatra festival, yes, you may go because in your present temple the Deities are not regularly installed. So you can close the temple for a few days keeping in front of the Deities some dried fruits and a tumbler of water. When the Deity is installed it is called niyama seva. That means the routine seva prescribed after installation you cannot stop. But Lord Caitanya Mahaprabhu is very kind to the fallen souls of the Kali Yuga and He is satisfied with chanting of Hare Krsna mantra. And for chanting the Hare Krsna mantra there is no hard and fast rules and regulations, so if you are absent for chanting Hare Krsna mantra somewhere else, it is as good as to chant the Hare Krsna mantra in the temple. Your chanting may not be stopped; it does not matter where you chant.
The next question, about the living entities falling down in this material world are not from the impersonal brahman. Existence in the impersonal brahman is also within the category of non-Krsna consciousness. Those who are in the brahman effulgence they are also in the fallen condition, so there is no question of falling down from a fallen condition. When fall takes place, it means falling down from the non-fallen condition.
The non-fallen condition is Krsna consciousness. So long one can maintain pure Krsna consciousness he is not fallen down. As soon as he becomes out of Krsna consciousness immediately he is fallen down. It does not matter where a living entity stays. In the material world also there are different stages of living conditions, and to remain in the brahman effulgence is also another phase of that fallen condition. Just like in the Bhagavad Gita it is stated that conditioned souls by their pious activities are elevated to the higher planetary system, but as soon as the stock of pious activities is finished he again comes down on the earthly planet. Similarly those who are elevated beyond the planetary system to the brahman effulgence, they are also prone to fall down as much as a living entity from the higher planetary system.
As such those who are thinking that they are liberated by being situated in brahman effulgence are described in the Srimad Bhagavatam as impurely intelligent. In other words, they are actually not liberated, and because they are not actually liberated they again come down to the material world as much as a living entity elevated to the higher planetary system comes down to this earthly planet. So we do not accept anyone elevated to the brahman effulgence as actually liberated.
I hope this will clarify the matter for you.
Hope this will meet you in good health.
Your ever well-wisher,