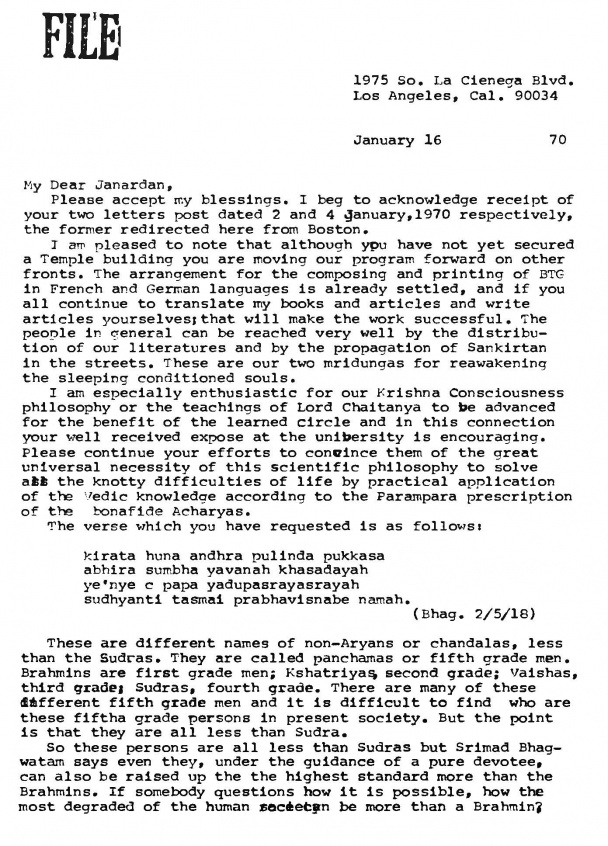 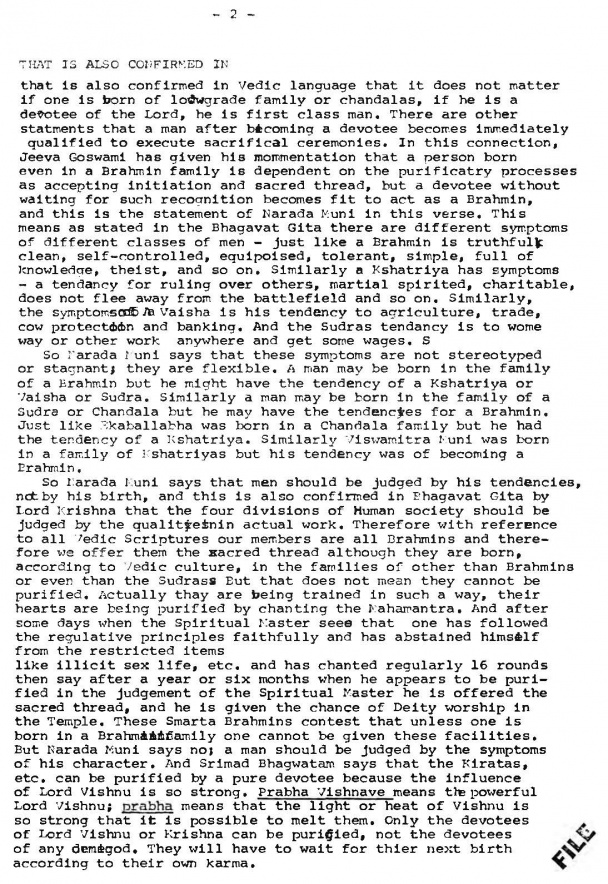 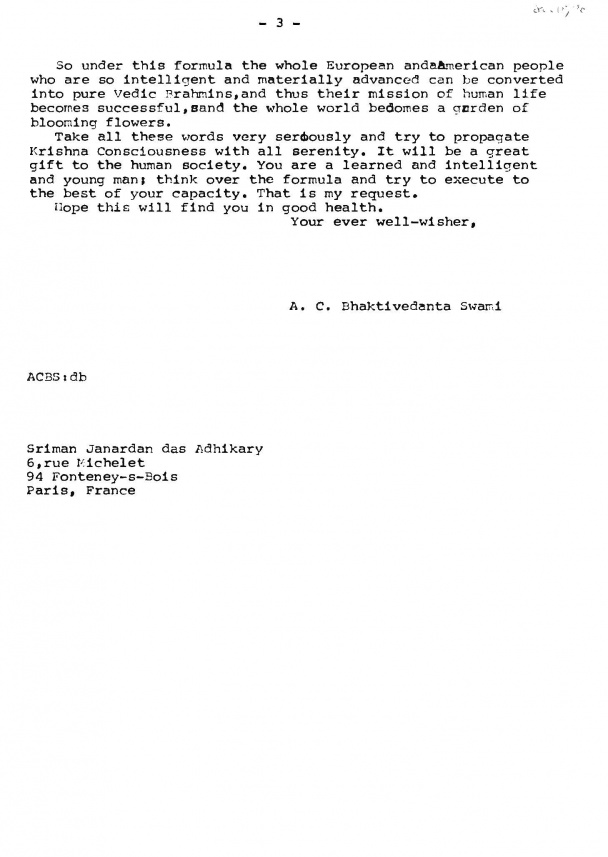 My Dear Janardan,
Please accept my blessings. I beg to acknowledge receipt of your two letters post dated 2 and 4 January, 1970 respectively, the former redirected here from Boston.
I am pleased to note that although you have not yet secured a Temple building you are moving our program forward on other fronts. The arrangement for the composing and printing of BTG in French and German languages is already settled, and if you all continue to translate my books and articles and write articles yourselves; that will make the work successful. The people in general can be reached very well by the distribution of our literatures and by the propagation of Sankirtan in the streets. These are our two mridungas for reawakening the sleeping conditioned souls.
I am especially enthusiastic for our Krishna Consciousness philosophy or the teachings of Lord Chaitanya to be advanced for the benefit of the learned circle and in this connection your well received expose at the university is encouraging. Please continue your efforts to convince them of the great universal necessity of this scientific philosophy to solve all the knotty difficulties of life by practical application of the Vedic knowledge according to the Parampara prescription of the bona fide Acharyas.
The verse which you have requested is as follows:

These are different names of non-Aryans or chandalas, less than the Sudras. They are called panchamas or fifth grade men. Brahmins are first grade men; Kshatriyas, second grade; Vaishas, third grade; Sudras, fourth grade. There are many of these different fifth grade men and it is difficult to find who are these fifth grade persons in present society. But the point is that they are all less than Sudra.
So these persons are all less than Sudras but Srimad Bhagwatam says even they, under the guidance of a pure devotee, can also be raised up the the highest standard more than the Brahmins. If somebody questions how it is possible, how the most degraded of the human society be more than a Brahmin? That is also confirmed in Vedic language that it does not matter if one is born of low grade family or chandalas, if he is a devotee of the Lord, he is first class man. There are other statements that a man after becoming a devotee becomes immediately qualified to execute sacrificial ceremonies. In this connection, Jeeva Goswami has given his commentation that a person born even in a Brahmin family is dependent on the purificatory processes as accepting initiation and sacred thread, but a devotee without waiting for such recognition becomes fit to act as a Brahmin, and this is the statement of Narada Muni in this verse. This means as stated in the Bhagavad Gita there are different symptoms of different classes of men -just like a Brahmin is truthful, clean, self-controlled, equipoised, tolerant, simple, full of knowledge, theist, and so on. Similarly a Kshatriya has symptoms—a tendency for ruling over others, martial spirited, charitable, does not flee away from the battlefield and so on. Similarly, the symptoms of a Vaisha is his tendency to agriculture, trade, cow protection and banking. And the Sudra's tendency is to some way or other work anywhere and get some wages.
So Narada Muni says that these symptoms are not stereotyped or stagnant; they are flexible. A man may be born in the family of a Brahmin but he might have the tendency of a Kshatriya or Vaisha or Sudra. Similarly a man may be born in the family of a Sudra or Candala but he may have the tendencies for a Brahmin. Just like Ekaballabha was born in a Chandala family but he had the tendency of a Kshatriya. Similarly Visvamitra Muni was born in a family of Kshatriyas but his tendency was of becoming a Brahmin.
So Narada Muni says that men should be judged by his tendencies, not by his birth, and this is also confirmed in Bhagavad Gita by Lord Krishna that the four divisions of human society should be judged by the qualities in actual work. Therefore with reference to all Vedic Scriptures our members are all Brahmins and therefore we offer them the sacred thread although they are born, according to Vedic culture, in the families of other than Brahmins or even than the Sudras. But that does not mean they cannot be purified. Actually they are being trained in such a way, their hearts are being purified by chanting the Mahamantra. And after some days when the Spiritual Master sees that one has followed the regulative principles faithfully and has abstained himself from the restricted items like illicit sex life, etc. and has chanted regularly 16 rounds then say after a year or six months when he appears to be purified in the judgment of the Spiritual Master he is offered the sacred thread, and he is given the chance of Deity worship in the Temple. These Smarta Brahmins contest that unless one is born in a Brahmin family one cannot be given these facilities. But Narada Muni says no; a man should be judged by the symptoms of his character. And Srimad Bhagavatam says that the Kiratas, etc. can be purified by a pure devotee because the influence of Lord Visnu is so strong. Prabha Vishnave means the powerful Lord Visnu; prabha means that the light or heat of Vishnu is so strong that it is possible to melt them. Only the devotees of Lord Vishnu or Krishna can be purified, not the devotees of any demigod. They will have to wait for their next birth according to their own karma.
So under this formula the whole European and American people who are so intelligent and materially advanced can be converted into pure Vedic Brahmins, and thus their mission of human life becomes successful, and the whole world becomes a garden of blooming flowers.
Take all these words very seriously and try to propagate Krishna Consciousness with all serenity. It will be a great gift to the human society. You are a learned and intelligent and young man; think over the formula and try to execute to the best of your capacity. That is my request.
Hope this will find you in good health.
Your ever well-wisher,