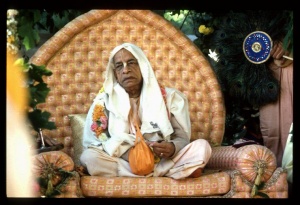 Please accept my blessings. I am so glad to receive your letter dated September 5, 1968, and I am so pleased to learn that you are feeling well, and you have decided to stay therein Berlin and open a temple. It is so much pleasing to me. You also write to say that you do not believe money will be any problem there. In the last line of your letter you say that you wish to write me very soon to tell me that the Berlin branch of ISKCON has been opened. This is very nice.

May Krishna bless you with all His blessings and be successful in your very noble enterprise.

In the meantime, I have just talked with Krishna das and the German boy, Uttama Sloka das, and they are prepared to join you by the end of this month. Sriman Uttama Sloka is already initiated, and he is a German scholar also. He has shown me his translation work on my essays in English, and it appears that he will be a great help in the Berlin center. I am trying to inject in him the basic ideals of Krishna Consciousness philosophy and this morning we had one nice discussion. So the Berlin temple will be one of the most important centers in Europe, and I hope that in the future we will be able to train many Germans who are very intelligent personalities in the European countries. You know that I have got already one German God-brother, and he has influenced another German scholar, Vamana dasa, who has written a very nice book on Lord Caitanya, in German. So in that great country, people are very much interested with India's original spiritual and cultural life, and Krishna Consciousness is the most perfect order of such cultural understanding in India. Lord Caitanya is the symbol of India's original culture, and perfect Scholar for exposition of India's philosophical thoughts, based on the Vedic knowledge. I hope our books, Bhagavad-gita, as it is; Teachings of Lord Caitanya, and Srimad-Bhagavatam will in the near future be translated into German language and distributed to the noble nation of Germany. You may not think for the time being of any other branch, at least for the coming one year. And as soon as Krishna das and Uttama Sloka go there, please make combined effort to popularize this Krishna Consciousness movement in that country. They will take with them a mrdanga drum. And I understand that in Germany they make very nice harmoniums. Please take information of them and let me know immediately, otherwise, Krishna das will take a harmonium from here, along with mrdanga. This Krishna Consciousness movement through music, philosophy, spiritual culture, and personal behavior culminating in ideal character of the devotees. All these heavenly contributions combined together will certainly bring about a major change in the life of Western people.

You will be glad to know that the 6 devotees who started for London by the end of August, 1968, have already met together in London and their address is as follows: Michael Grant, 80 Herne Hill, London S.E. 24, England. They are also very much hopeful for the Indian cooperation whose number there is not less than 200,000 to 500,000 Indians. So I shall start for Europe, either for Berlin or for London as I may be required by the devotees there. And I shall be glad if you be in regular touch with me at least once in a week, by writing me letters.

Thanking you once more and I am praying to Krishna to offer you all His strength, in the discharge of His noble service. Hope you are well,