670726 - Letter to Children at New York written from Delhi 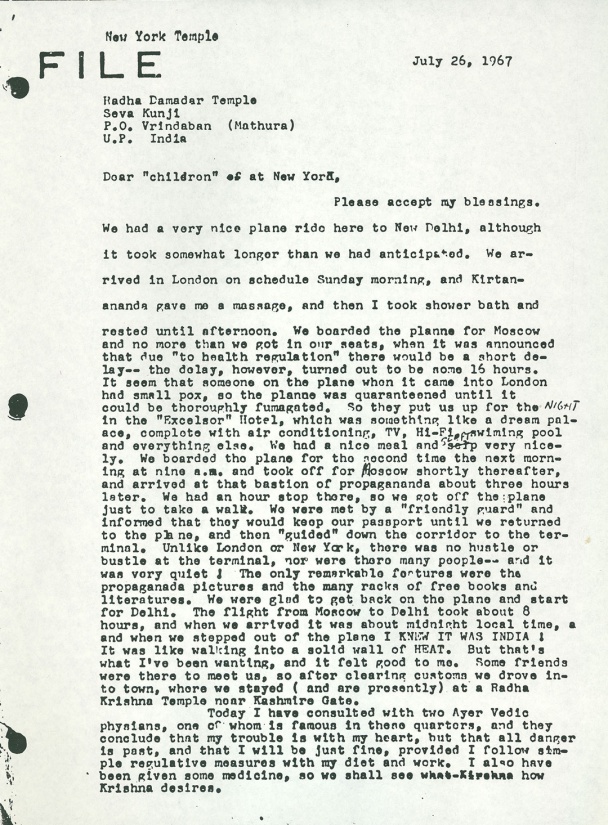 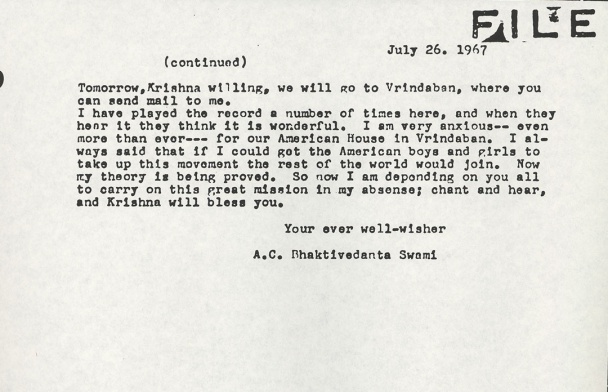 Please accept my blessings. We had a very nice plane ride here to New Delhi, although it took somewhat longer than we had anticipated. We arrived in London on schedule Sunday morning, and Kirtanananda gave me a massage, and then I took shower bath and rested until afternoon. We boarded the plane for Moscow and no more than we got in our seats, when it was announced that due "to health regulation" there would be a short delay--the delay, however, turned out to be some 16 hours. It seem that someone on the plane when it came into London had small pox, so the plane was quaranteened until it could be thoroughly fumigated. So they put us up for the night in the "Excelsior" Hotel, which was something like a dream palace, complete with air conditioning, TV, Hi-Fi swimming pool and everything else. We had a nice meal and slept [handwritten] very nicely. We boarded the plane for the second time the next morning at nine a.m. and took off for Moscow [handwritten] shortly thereafter, and arrived at that bastion of propaganda about three hours later. We had an hour stop there, so we got off the plane just to take a walk. We were met by a "friendly guard" and informed that they would keep our passport until we returned to the plane, and then "guided" down the corridor to the terminal. Unlike London or New York, there was no hustle or bustle at the terminal, nor were there many people--and it was very quiet! The only remarkable features were the propaganda pictures and the many racks of free books and literatures. We were glad to get back on the plane and start for Delhi. The flight from Moscow to Delhi took about 8 hours, and when we arrived it was about midnight local time, and when we stepped out of the plane I KNEW IT WAS INDIA! It was like walking into a solid wall of HEAT. But that's what I've been wanting, and it felt good to me. Some friends were there to meet us, so after clearing customs we drove into town, where we stayed (and are presently) at a Radha Krishna Temple near Kashmire Gate.
Today I have consulted with two Ayur Vedic physicians, one of whom is famous in these quarters, and they conclude that my trouble is with my heart, but that all danger is past, and that I will be just fine, provided I follow simple regulative measures with my diet and work. I also have been given some medicine, so we shall see what-Krishna how Krishna desires. Tomorrow, Krishna willing, we will go to Vrindaban, where you can send mail to me.
I have played the record a number of times here, and when they hear it they think it is wonderful. I am very anxious--even more than ever--for our American House in Vrindaban. I always said that if I could get the American boys and girls to take up this movement the rest of the world would join. Now my theory is being proved. So now I am depending on you all to carry on this great mission in my absence; chant and hear, and Krishna will bless you.