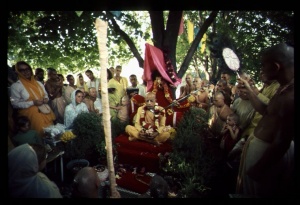 After some time, the teachers Ṣaṇḍa and Amarka thought that Prahlāda Mahārāja was sufficiently educated in the diplomatic affairs of pacifying public leaders, appeasing them by giving them lucrative posts, dividing and ruling over them, and punishing them in cases of disobedience. Then, one day, after Prahlāda's mother had personally washed the boy and dressed him nicely with sufficient ornaments, they presented him before his father.

It is essential for a student who is going to be a ruler or king to learn the four diplomatic principles. There is always rivalry between a king and his citizens. Therefore, when a citizen agitates the public against the king, the duty of the king is to call him and try to pacify him with sweet words, saying, "You are very important in the state. Why should you disturb the public with some new cause for agitation?" If the citizen is not pacified, the king should then offer him some lucrative post as a governor or minister-any post that draws a high salary—so that he may be agreeable. If the enemy still goes on agitating the public, the king should try to create dissension in the enemy's camp, but if he still continues, the king should employ argumentum ad baculum—severe punishment—by putting him in jail or placing him before a firing squad. The teachers appointed by Hiraṇyakaśipu taught Prahlāda Mahārāja how to be a diplomat so that he could rule over the citizens very nicely.