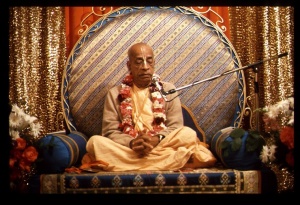 Others, who were as intelligent as King Pṛthu, also took the essence out of the earthly planet. Indeed, everyone took this opportunity to follow in the footsteps of King Pṛthu and get whatever he desired from the planet earth.

The planet earth is also called vasundharā. The word vasu means "wealth," and dharā means "one who holds." All creatures within the earth fulfill the necessities required for human beings, and all living entities can be taken out of the earth by the proper means. As suggested by the planet earth, and accepted and initiated by King Pṛthu, whatever is taken from the earth—either from the mines, from the surface of the globe or from the atmosphere—should always be considered the property of the Supreme Personality of Godhead and should be used for Yajña, Lord Viṣṇu. As soon as the process of yajña is stopped, the earth will withhold all productions—vegetables, trees, plants, fruits, flowers, other agricultural products and minerals. As confirmed in Bhagavad-gītā, the process of yajña was instituted from the beginning of creation. By the regular performance of yajña, the equal distribution of wealth and the restriction of sense gratification, the entire world will be made peaceful and prosperous. As already mentioned, in this age of Kali the simple performance of saṅkīrtana-yajña—the holding of festivals as initiated by the International Society for Krishna Consciousness—should be introduced in every town and village. Intelligent men should encourage the performance of saṅkīrtana-yajña by their personal behavior. This means that they should follow the process of austerity by restricting themselves from illicit sex life, meat-eating, gambling and intoxication. If the intelligent men, or the brāhmaṇas of society, would follow the rules and regulations, certainly the entire face of this present world, which is in such chaotic condition, would change, and people would be happy and prosperous.