Śrī Caitanya-caritāmṛta - Ādi-līlā - Chapter 10: The Trunk, Branches and Subbranches of the Caitanya Tree 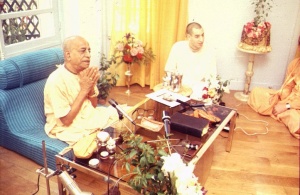 On the western side were the forty-third, forty-fourth and forty-fifth branches—Śrī Sanātana, Śrī Rūpa and Anupama. They were the best of all.

Śrī Anupama was the father of Śrīla Jīva Gosvāmī and younger brother of Śrī Sanātana Gosvāmī and Śrī Rūpa Gosvāmī. His former name was Vallabha, but after Lord Caitanya met him He gave him the name Anupama. Because of working in the Muslim government, these three brothers were given the title Mullik. Our personal family is connected with the Mulliks of Mahatma Gandhi Road in Calcutta, and we often used to visit their Rādhā-Govinda temple. They belong to the same family as we do. Our family gotra, or original genealogical line, is the Gautama-gotra, or line of disciples of Gautama Muni, and our surname is De. But due to their accepting the posts of zamindars in the Muslim government, they received the title Mullik. Similarly, Rūpa, Sanātana and Vallabha were also given the title Mullik. Mullik means “lord.” Just as the English government gives rich and respectable persons the title “lord,” so the Muslims give the title Mullik to rich, respectable families that have intimate connections with the government. Thus the title Mullik is found not only among the Muslims but also among the Hindu aristocracy. This title is not restricted to a particular family but is given to different families and castes. The qualifications for receiving it are wealth and respectability.

Sanātana Gosvāmī and Rūpa Gosvāmī belonged to the Bharadvāja-gotra, which indicates that they belonged either to the family or disciplic succession of Bharadvāja Muni. As members of the Kṛṣṇa consciousness movement we belong to the family, or disciplic succession, of Sarasvatī Gosvāmī, and thus we are known as Sārasvatas. Obeisances are therefore offered to the spiritual master as sārasvata-deva, or a member of the Sārasvata family (namas te sārasvate deve), whose mission is to broadcast the cult of Śrī Caitanya Mahāprabhu (gaura-vāṇī-pracāriṇe) and to fight with impersonalists and voidists (nirviśeṣa-śūnyavādi-pāścātya-deśa-tāriṇe). This was also the occupational duty of Sanātana Gosvāmī, Rūpa Gosvāmī and Anupama Gosvāmī.

The genealogical table of Sanātana Gosvāmī, Rūpa Gosvāmī and Vallabha Gosvāmī can be traced back to the twelfth century Śakābda, when a gentleman of the name Sarvajña appeared in a very rich and opulent brāhmaṇa family in the province of Karṇāṭa. He had two sons, named Aniruddhera Rūpeśvara and Harihara, who were both bereft of their kingdoms and thus obliged to reside in the highlands. The son of Rūpeśvara, who was named Padmanābha, moved to a place in Bengal known as Naihāṭī, on the bank of the Ganges. There he had five sons, of whom the youngest, Mukunda, had a well-behaved son named Kumāradeva, who was the father of Rūpa, Sanātana and Vallabha. Kumāradeva lived in Phateyābād, an area bordering Bāklācandradvīpa in East Bengal (now Bangladesh). The present-day village of Prembagh, which lies near Ramshara in the Jessore district of Bangladesh, is said by many to be the site of Kumāradeva’s house. Of his many sons, three took to the path of Vaiṣṇavism. Later, Śrī Vallabha and his elder brothers Śrī Rūpa and Sanātana came from Candradvīpa to the village in the Maldah district of Bengal known as Rāmakeli. It is in this village that Śrīla Jīva Gosvāmī took birth, accepting Vallabha as his father. Because of engaging in the service of the Muslim government, the three brothers received the title Mullik. When Lord Caitanya Mahāprabhu visited the village of Rāmakeli, He met Vallabha there. Later, Śrī Rūpa Gosvāmī, after meeting Śrī Caitanya Mahāprabhu, resigned from government service, and when he went to Vṛndāvana to meet Lord Caitanya, Vallabha accompanied him. The meeting of Rūpa Gosvāmī and Vallabha with Caitanya Mahāprabhu at Allahabad is described in the Madhya-līlā, Chapter Nineteen.

In the Gaura-gaṇoddeśa-dīpikā (180) Śrī Rūpa Gosvāmī is described to be the gopī named Śrī Rūpa-mañjarī. In the Bhakti-ratnākara there is a list of the books Śrī Rūpa Gosvāmī compiled. Of all his books, the following sixteen are very popular among Vaiṣṇavas: (1) Haṁsadūta, (2) Uddhava-sandeśa, (3) Kṛṣṇa-janma-tithi-vidhi, (4 and 5) Rādhā-kṛṣṇa-gaṇoddeśa-dīpikā, Bṛhat (major) and Laghu (minor), (6) Stavamālā, (7) Vidagdha-mādhava, (8) Lalita-mādhava, (9) Dāna-keli-kaumudi, (10) Bhakti-rasāmṛta-sindhu (this is the most celebrated book by Śrī Rūpa Gosvāmī), (11) Ujjvala-nīlamaṇi, (12) Ākhyāta-candrikā, (13) Mathurā-mahimā, (14) Padyāvalī, (15) Nāṭaka-candrikā and (16) Laghu-bhāgavatāmṛta. Śrī Rūpa Gosvāmī gave up all family connections, joined the renounced order of life and divided his money, giving fifty percent to the brāhmaṇas and Vaiṣṇavas and twenty-five percent to his kuṭumba (family members), and keeping twenty-five percent for personal emergencies. He met Haridāsa Ṭhākura in Jagannātha Purī, where he also met Lord Caitanya and His other associates. Śrī Caitanya Mahāprabhu used to praise the handwriting of Rūpa Gosvāmī. Śrīla Rūpa Gosvāmī could compose verses according to the desires of Śrī Caitanya Mahāprabhu, and by His direction he wrote two books named Lalita-mādhava and Vidagdha-mādhava. Lord Caitanya desired the two brothers, Sanātana Gosvāmī and Rūpa Gosvāmī, to publish many books in support of the Vaiṣṇava religion. When Sanātana Gosvāmī met Śrī Caitanya Mahāprabhu, the Lord advised him also to go to Vṛndāvana.

Śrī Sanātana Gosvāmī is described in the Gaura-gaṇoddeśa-dīpikā (181). He was formerly known as Rati-mañjarī or sometimes Lavaṅga-mañjarī. In the Bhakti-ratnākara it is stated that his spiritual master, Vidyā-vācaspati, sometimes stayed in the village of Rāmakeli, and Sanātana Gosvāmī studied all the Vedic literatures from him. He was so devoted to his spiritual master that this cannot be described. According to the Vedic system, if someone sees a Muslim he must perform rituals to atone for the meeting. Sanātana Gosvāmī always associated with Muslim kings. Not giving much attention to the Vedic injunctions, he used to visit the houses of Muslim kings, and thus he considered himself to have been converted into a Muslim. He was therefore always very humble and meek. When Sanātana Gosvāmī presented himself before Lord Caitanya Mahāprabhu, he said, “I am always in association with lower-class people, and my behavior is therefore very abominable.” He actually belonged to a respectable brāhmaṇa family, but because he considered his behavior to be abominable, he did not try to place himself among the brāhmaṇas but always remained among people of the lower castes. He wrote the Hari-bhakti-vilāsa and Vaiṣṇava-toṣaṇī, which is a commentary on the Tenth Canto of Śrīmad-Bhāgavatam. In the year 1476 Śakābda (A.D. 1554) he completed the Bṛhad-vaiṣṇava-toṣaṇī commentary on Śrīmad-Bhāgavatam. In the year 1504 Śakābda (A.D. 1582) Śrīla Jīva Gosvāmī published an edited version of the Bṛhad-vaiṣṇava-toṣaṇī named Laghu-toṣaṇī.

Śrī Caitanya Mahāprabhu taught His principles through four chief followers. Among them, Rāmānanda Rāya is exceptional, for through him the Lord taught how a devotee can completely vanquish the power of Cupid. By Cupid’s power, as soon as one sees a beautiful woman he is conquered by her beauty. Śrī Rāmānanda Rāya, however, vanquished Cupid’s pride. Indeed, while rehearsing the Jagannātha-vallabha-nāṭaka he personally directed extremely beautiful young girls in dancing, but he was never affected by their youthful beauty. Śrī Rāmānanda Rāya personally bathed these girls, touching them and washing them with his own hands, yet he remained calm and passionless, as a great devotee should be. Lord Caitanya Mahāprabhu certified that this was possible only for Rāmānanda Rāya. Similarly, Dāmodara Paṇḍita was notable for his objectivity as a critic. He did not even spare Caitanya Mahāprabhu from his criticism. This also cannot be imitated by anyone else. Haridāsa Ṭhākura is exceptional for his forbearance because although he was beaten with canes in twenty-two marketplaces, he was nevertheless tolerant. Similarly, Śrī Sanātana Gosvāmī, although he belonged to a most respectable brāhmaṇa family, was exceptional for his humility and meekness.

In the Madhya-līlā, Chapter Nineteen, the device adopted by Sanātana Gosvāmī to get free from government service is described. He served a notice of sickness to the Nawab, the Muslim governor, but actually he was studying Śrīmad-Bhāgavatam with brāhmaṇas at home. The Nawab received information of this through a royal physician, and he immediately went to see Sanātana Gosvāmī to discover his intentions. The Nawab requested Sanātana to accompany him on an expedition to Orissa, but when Sanātana Gosvāmī refused, the Nawab ordered that he be imprisoned. When Rūpa Gosvāmī left home, he wrote a note for Sanātana Gosvāmī informing him of some money that he had entrusted to a local grocer. Sanātana Gosvāmī took advantage of this money to bribe the jail keeper and get free from detention. Then he left for Benares to meet Caitanya Mahāprabhu, bringing with him only one servant, whose name was Īśāna. On the way they stopped at a sarāi, or hotel, and when the hotel keeper found out that Īśāna had some gold coins with him, he planned to kill both Sanātana Gosvāmī and Īśāna to take away the coins. Later Sanātana Gosvāmī saw that although the hotel keeper did not know them, he was being especially attentive to their comfort. Therefore he concluded that Īśāna was secretly carrying some money and that the hotel keeper was aware of this and therefore planned to kill them for it. Upon being questioned by Sanātana Gosvāmī, Īśāna admitted that he indeed had money with him, and immediately Sanātana Gosvāmī took the money and gave it to the hotel keeper, requesting him to help them get through the jungle. Thus with the help of the hotel keeper, who was also the chief of the thieves of that territory, Sanātana Gosvāmī crossed over the Hazipur mountains, which are presently known as the Hazaribags. He then met his brother-in-law Śrīkānta, who requested that he stay with him. Sanātana Gosvāmī refused, but before they parted Śrīkānta gave him a valuable blanket.

The place where Śrī Rūpa Gosvāmī and Sanātana Gosvāmī formerly lived has now become a place of pilgrimage. It is generally known as Gupta Vṛndāvana, or hidden Vṛndāvana, and is situated about eight miles south of English Bazaar. There the following places are still visited: (1) the temple of the Śrī Madana-mohana Deity, (2) the Keli-kadamba tree, under which Śrī Caitanya Mahāprabhu met Sanātana Gosvāmī at night and (3) Rūpasāgara, a large pond excavated by Śrī Rūpa Gosvāmī. A society named Rāmakeli-saṁskāra-samiti was established in 1924 to repair the temple and renovate the pond.